The National Hurricane Center says there is now a 90 percent chance of a disturbance turning into a tropical system.

It's becoming increasingly likely that a tropical depression or tropical storm will form soon in the Gulf of Mexico and bring heavy rain and gusty winds to parts of the Florida Peninsula beginning late Thursday.

A tropical disturbance in the northwestern Caribbean, which has been now dubbed Potential Tropical Cyclone One by the National Hurricane Center, is still in the throes of getting organized.

A potential tropical cyclone is still just a disorganized disturbance, but forecasters at the NHC think it might organize before it reaches the coast, and if it does, it has a good chance of producing winds over 40 mph. The designation also allows the NHC to issue Tropical Storm Watches and Warnings, if needed.

The storm was upgraded Thursday afternoon from being Invest 91L – an invest is simply a naming convention used by the NHC to identify areas it is investigating for possible development into a tropical depression or tropical storm within the next five days.

Heavy tropical rains and gusty winds are already occurring, but hostile upper-level winds are still preventing this disturbance from consolidating into an organized area of low pressure.

Hurricane Hunters are flying into PTC One Thursday afternoon to see if a closed circulation has developed under the clouds that we can see from satellite imagery. 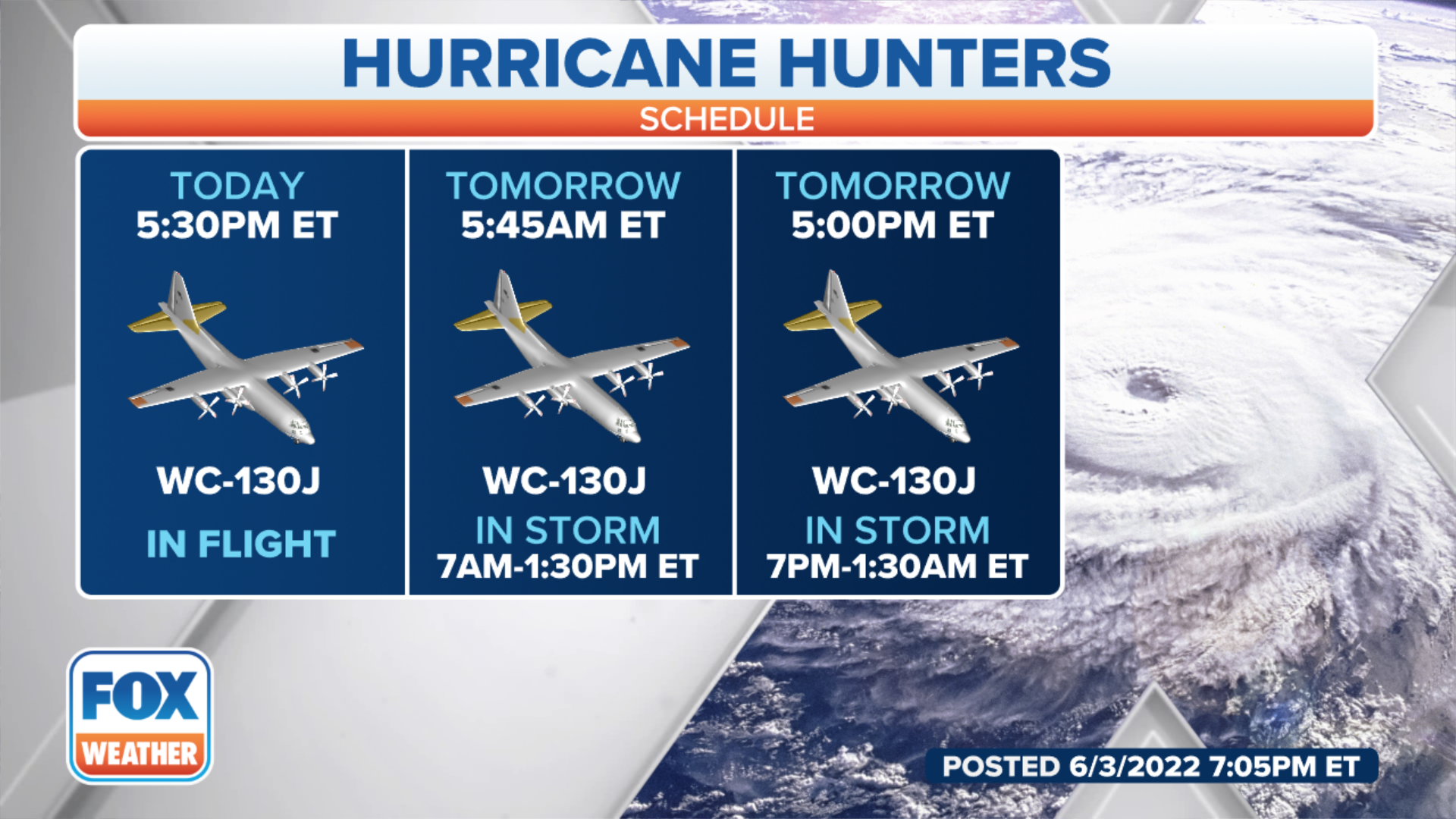 The plan of the day for the Hurricane Hunters.
(FOX Weather)

An ocean buoy located not far from the apparent center of the tropical disturbance is consistently showing winds in the 30- to 35-mph range, so this system is guaranteed to contain gusty winds when it gets to Florida, even if it doesn’t organize and intensify into a tropical depression or tropical storm.

A tropical cyclone needs an organized circulation and tall thunderstorms reasonably close to the center to significantly intensify. Computer forecast models indicate that the atmospheric pattern will only be marginal for organization.

As a result, PTC One is not forecast to evolve into anything stronger than a tropical depression or a low-end tropical storm.

If the system does achieve sufficient organization and winds reach 40 mph or higher, it will be called Tropical Storm Alex, the first name on this year's list of storm names for the Atlantic Basin. This could happen very close to the southwestern coast of Florida. 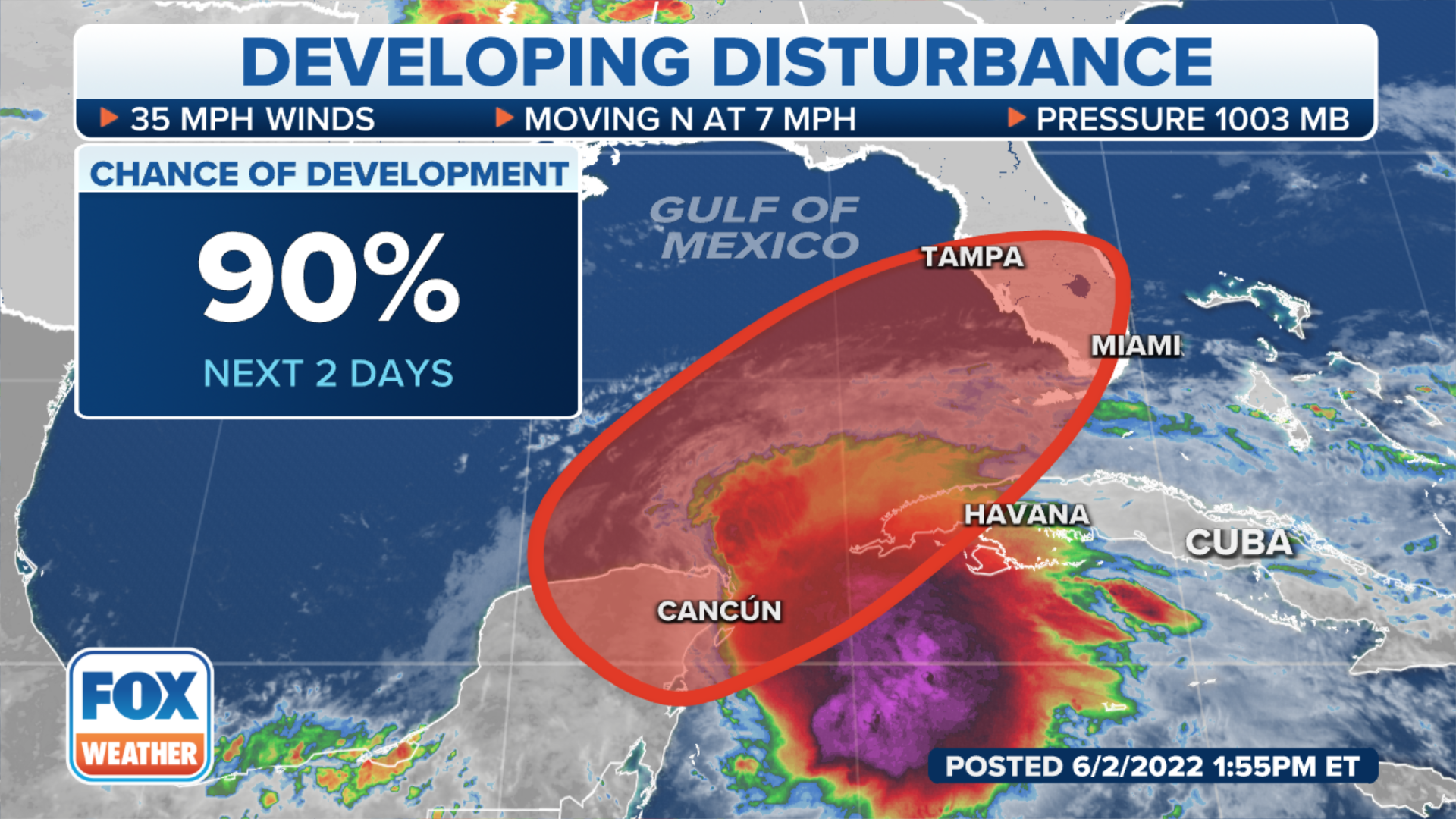 The National Hurricane Center is monitoring the southern Gulf of Mexico and the northwestern Caribbean Sea for possible tropical development this week.
(FOX Weather)

In any case, from Thursday through Friday, a mass of tropical moisture will surge toward the southern part of the Florida Peninsula. Several inches of rain are expected, with some locations receiving closer to a foot of rainfall.

The open question is: How far north will the heavy-rain swath extend?

Until the system gets more organized and forecasts become more certain, people along the Interstate 4 corridor from Tampa to Orlando need to stay aware. The likelihood of heavy rain in South Florida is high, however, including in the Miami metro area. 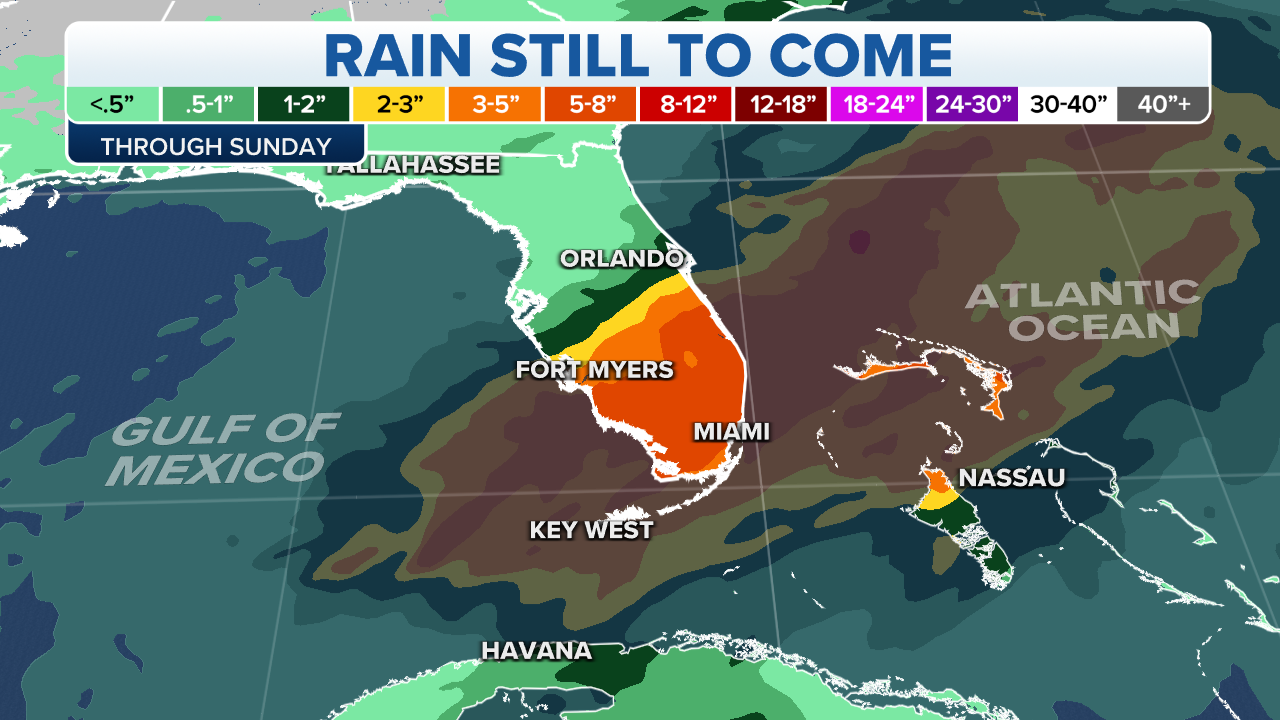 Rainfall forecast over the next seven days.
(FOX Weather)

Because the hostile upper-level winds are blowing from the west, the heavy rain will be pushed to the storm's eastern side, or the front side of the storm.

As a result, the tropical rains should arrive in portions of South Florida Thursday night, increase in intensity on Friday as winds gust to or near tropical-storm force (40-plus mph), and continue falling into Saturday. By late Saturday, winds might still be gusty, but dry air on the back side of the system should arrive and cause the rain to gradually diminish.

The ground in many parts of South Florida is saturated from days of heavy rain, so stay aware of any flood alerts issued by the National Weather Service. Some fast-developing tornadoes sometimes occur in these situations as well. 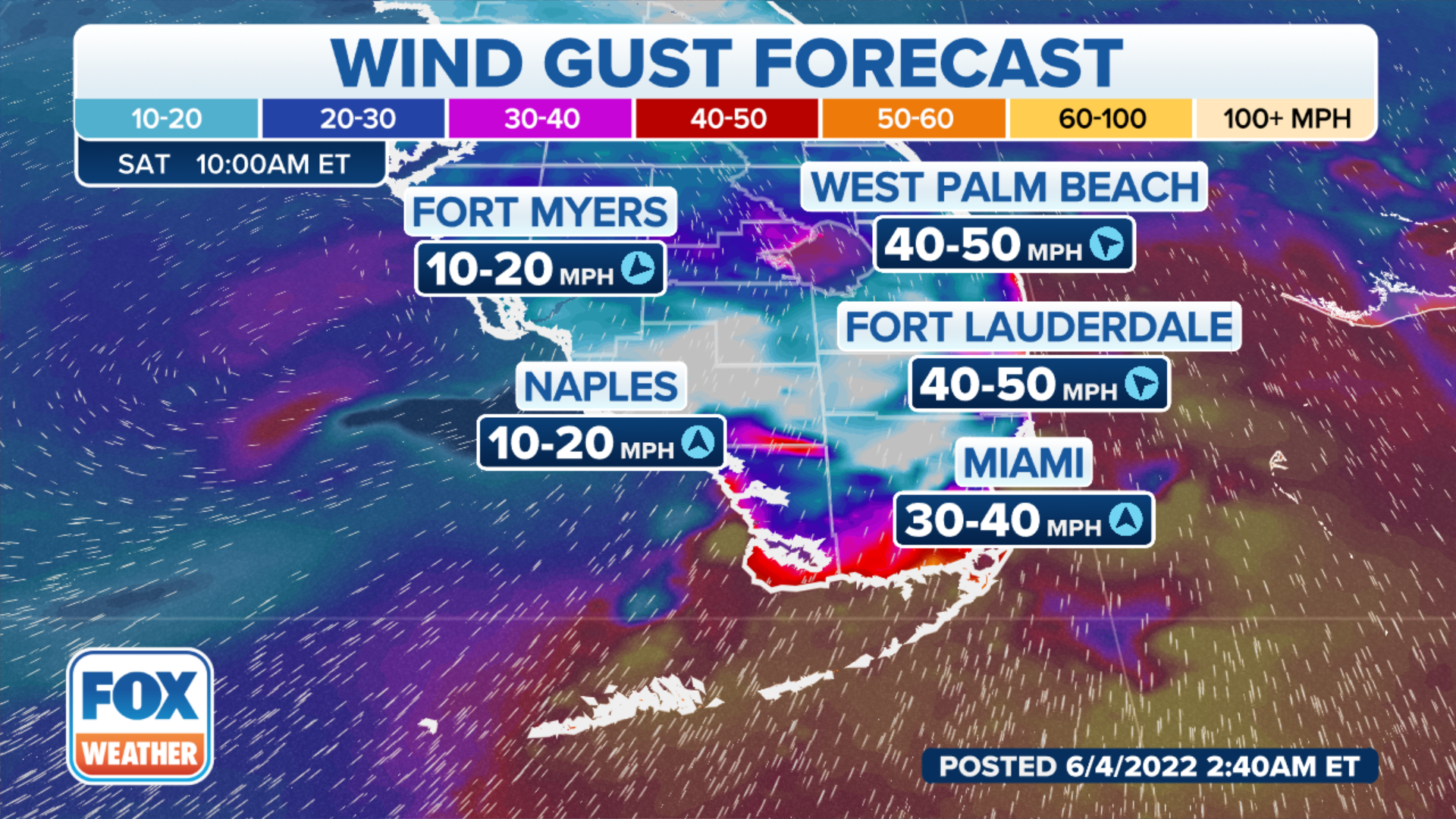 It may very well be dangerous to be on the roads in the southern part of Florida Friday into the daytime on Saturday. Think about changing your plans so that you’re settled in during the gustiest and rainiest part of the storm.

Stay updated on everything in the tropics this hurricane season. Download the FOX Weather app to get the latest forecasts, as well as any weather alerts that are issued.