The sky will be ideal for the massive balloons at the Macy's Thanksgiving Day Parade with winds only at 3 mph.

NEW YORK - The 96th annual Macy’s Thanksgiving Day Parade will get underway Thursday morning, but whether the event’s giant balloons will ever get off the ground will depend on what Mother Nature has in store for the big day.

The FOX Forecast Center expects temperatures to rise through the 40s under a mainly sunny sky, but what the weather organizers will closely be watching are the wind speeds.

A Macy’s spokesperson said winds sustained at 23 mph or gusts reaching 34 mph could alter the line of the parade’s largest balloons.

Wind is simply air that is moving due to differences in pressure, and fortunately, for spectators and millions of people watching on television, there are not expected to be any large weather systems causing an increased pressure gradient. 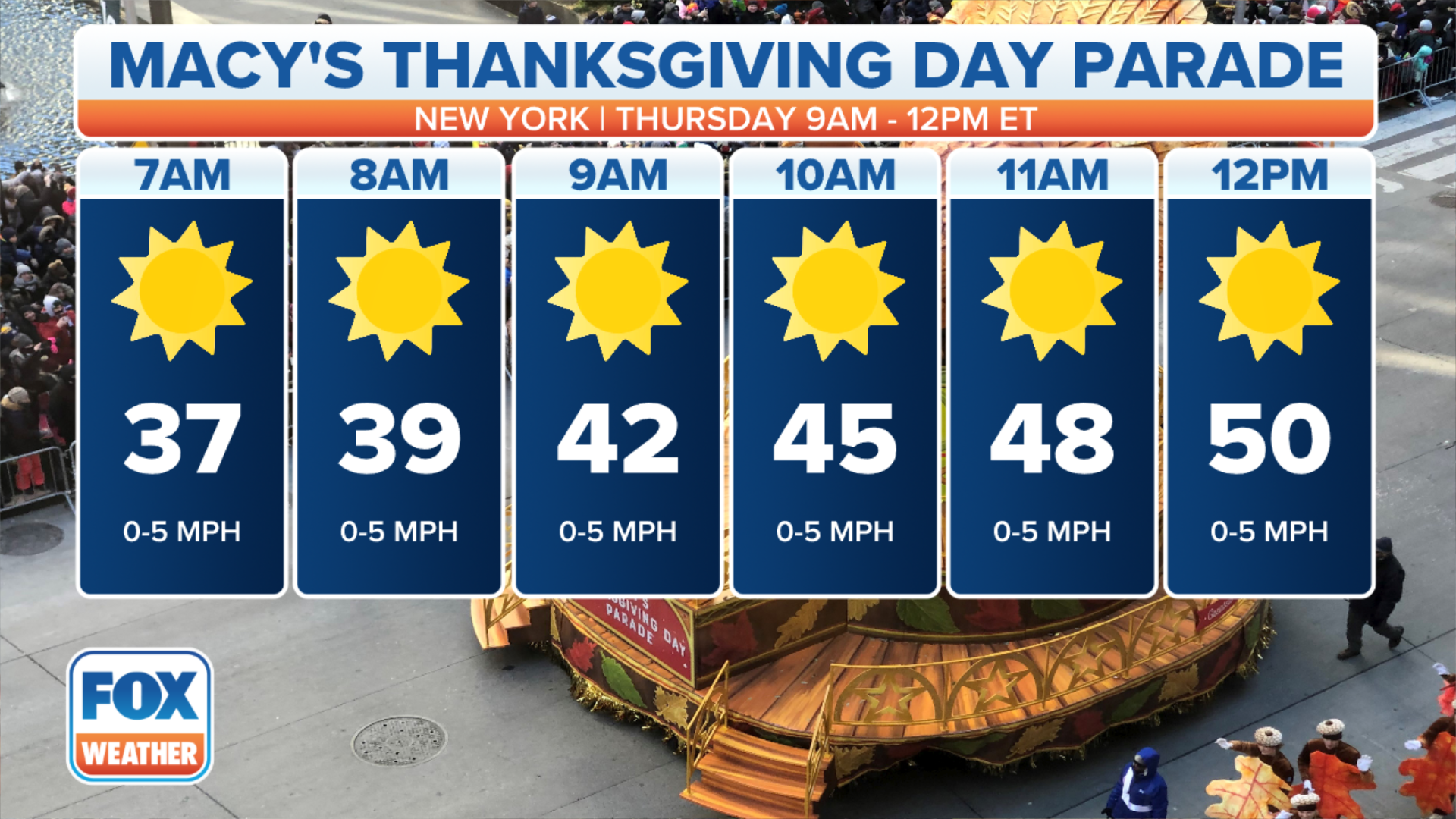 Computer forecast models show winds of less than 10 mph from a northerly direction, far below the thresholds for when restrictions would be put in place.

Macy’s has previously used the expertise of meteorologists with observations from anemometers along the 2.5-mile route to determine whether the giant characters meet the wind restrictions.

The tough weather guidelines were put in place following accidents where spectators were injured during high-wind events.

"We are a rain or shine event, and we do an extensive amount of engineering and training as it relates to our balloons. Winds sustained up to 23 mph, and any gusts up to about 34 mph is about the max in terms of our ability to fly," said Will Cross, executive producer of the Macy’s Thanksgiving Day Parade.

THE ONLY TIME THE MACY'S THANKSGIVING DAY PARADE WAS CANCELED

The nearly three-hour-long parade will kick off at West 77th Street & Central Park West and head southward through Manhattan. The parade route will end around Macy’s flagship department store in the Herald Square area of New York City. 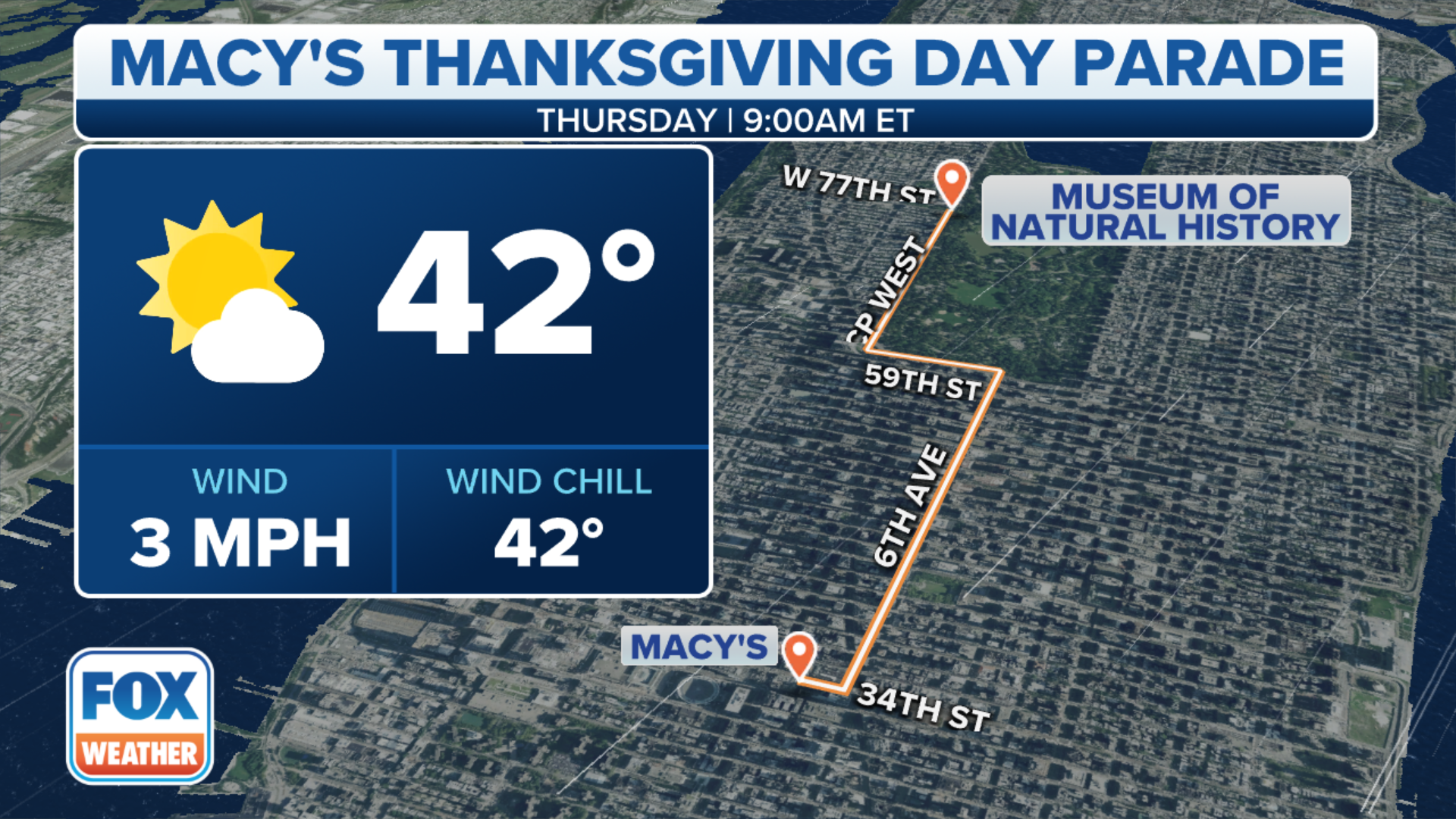 No tickets are required in the public viewing areas. Organizers suggest the best place to watch the parade will be along 6th Avenue from West 59th to West 38th streets.

New, giant balloons to be on the lookout for this year include "Bluey" by the BBC; "Diary of A Wimpy Kid" by Abrams Books; "DINO and Baby DINO" by Sinclair Oil; and "Stuart the Minion" from Illumination.

The inflatable lineup will also include "Striker, a U.S. Soccer Star" by FOX Sports. The 25-foot-tall balloonicle – a parade hybrid vehicle and cold-air inflatable balloon – is supposed to represent the skill players will need in the World Cup.

Macy's Thanksgiving Day Parade: How it started and what it takes to keep the balloons afloat

Only one event in the nearly 100-year-history of the Macy's Thanksgiving Day Parade has ever caused it to be cancelled—and it wasn't the weather.