FOX Weather is covering the second winter storm of the week as it crosses the U.S.

FlightAware.com reported more than 1,600 flights were canceled on Wednesday and a similar amount have been already canceled on Thursday. Impacted airports are mostly in Texas and in the Midwest.

Upwards of a foot of snow possible in Mountain West

Snow totals of upwards of a foot are possible in the higher elevations of the mountainous southwest. The snow is expected to move out of the region during the day on Thursday.

Some areas in northwest Arkansas could see half an inch of ice through Thursday. The frozen precipitation is already causing delays and cancellations.

At one point during the storm Wednesday all kinds of winter weather was happening, according to FOX Weather data specialist Shane Brown.

Here's what it looked like during the sleet storm in Texas and Oklahoma.

Wintry weather that is moving through the Central U.S. on Wednesday will eventually wind up in the Northeast. By Friday morning, much of the region could be looking at up to a quarter-inch of ice possible. As much as a half-inch of ice is possible across a large swath of Pennsylvania.

Accretions this high could lead to widespread power outages and treacherous roads. To find out more on what these ice amounts mean for you, click here.

Tulsa PD: Stay off the roads

Tulsa Police Capt. Richard Meulenberg said the road conditions are deteriorating and he is asking residents to "buckle down" and stay home.

"Don't run out to the store and get your toilet paper and milk right now. That time has passed," Meulenberg said.

Street crews are out trying to keep the streets clear and putting salt down.

The University of Missouri-St. Louis will cancel all on-campus classes and activities Thursday due to the winter storm. Classes will shift to virtual learning.

A Winter Storm Warning is in effect for east central Missouri until Thursday night.

FOX Weather correspondent Hunter Davis is in Tulsa where heavy sleet is covering roads in the downtown area.

"It's downright painful," she said of walking around with the sleet coming down in below freezing temperatures.

Air travel to be disrupted by winter storm Thursday

Several airports are expected to see delays and cancellations as a major winter storm moves across the country.

Freezing rain is coming down on the Capitol steps in Little Rock. Officials with the Arkansas DOT say this storm is "not a plowing event. It’s going to be primarily ice."

FOX Weather's 3D Radar shows the path of the winter storm moving across northwest Arkansas and into Missouri bringing sleet and freezing rain.

Thunder sleet? It's a thing 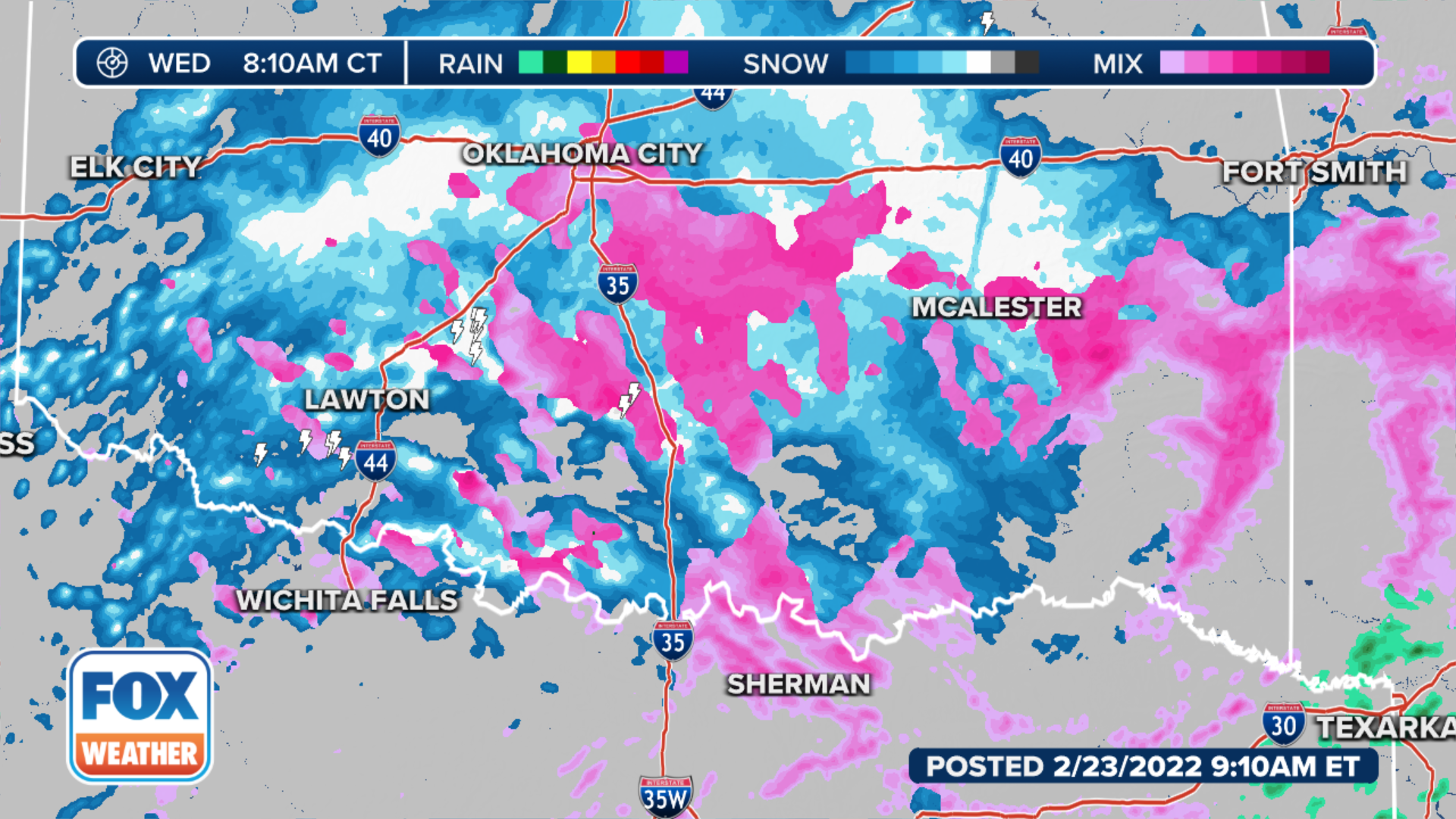 LEARN
Thunder sleet, thunder freezing rain: What causes lightning and thunder during a winter storm?
Thunder and lightning might be more common during the spring and summer, but winter storms can also produce a few rumbles when heavy snow, sleet or freezing rain are falling.

You may have heard the term "thundersnow" before, but what about thunder sleet?

It's rare, but it happens.

Wintry weather is moving across parts of northwest Arkansas, including both freezing rain and sleet.

AgWriterArk shared this video on Twitter of heavy sleet falling in Ferndale, Arkansas.

Commercial pilot Kathleen Bangs joined FOX Weather to discuss how the winter storm is causing delays and cancellations across the country. She said the Dallas-Fort Worth International Airport seems to be having the most problems because of the storm, which can have a ripple effect across the country.

This amount of ice could cause some widespread problems on roads and lead to power outages. Find out more here.

Ice on your windshield? Here’s how to remove it the right way 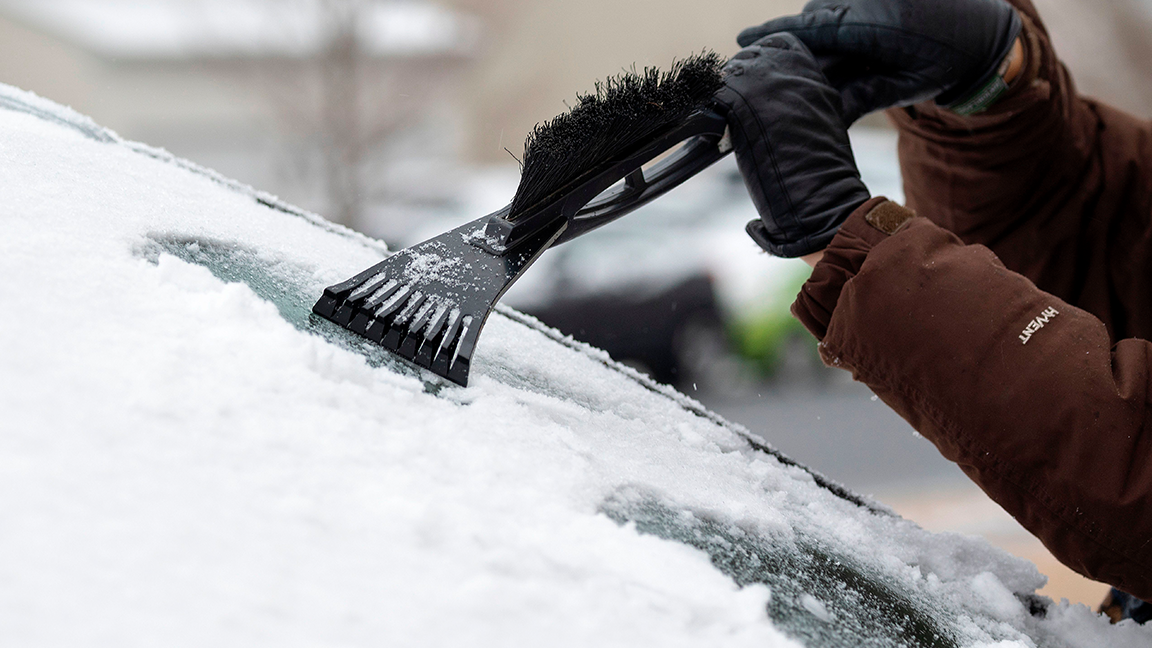 LEARN
Removing ice from your windshield can be easy - if you do it the right way
Snow isn’t the only challenge people face when it comes to getting vehicles ready for the roads during winter.

If you’re looking for ways to get ice off your car, you’ve come to the right place.

The second winter storm of the week is currently moving through the central U.S. before spreading into the Midwest and Northeast through Friday.

FOX Weather multimedia journalist Hunter Davis is in Tulsa, Oklahoma, and says the sleet and freezing rain has picked up in intensity.

Tulsa is currently under a winter storm warning until 6 p.m. local time on Thursday.

The NWS says the region will see periods of moderate to heavy sleet into the afternoon hours.

For the latest on this winter storm, click here. 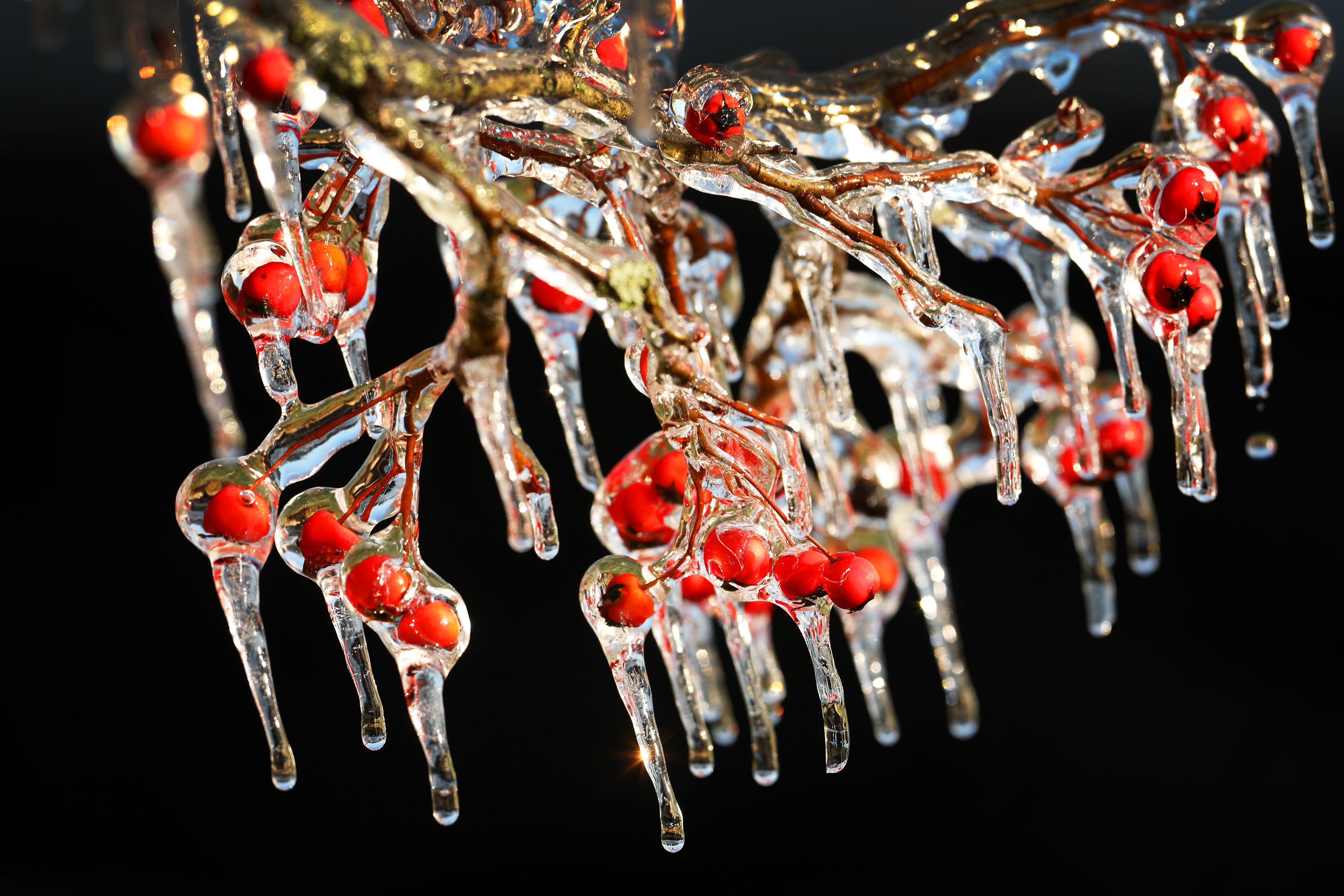 LEARN
Snow, sleet, freezing rain and hail: What's the difference?
A storm has passed through, and the ground is covered in frozen precipitation. But depending on its journey through the atmosphere, it could be snow, hail, or even sleet or freezing rain.

Get ready: The second winter storm in only a few days is now bringing snow and ice to areas of the Plains before it moves into the Midwest and Northeast through Friday.

FOX Weather will bring you the latest information throughout the storm.

Check out the latest details by clicking here.

Winter weather alerts up for 7 states

Winter Storm Warnings and Winter Weather Advisories have been issued for seven states -- from Texas to Illinois. Some of the alerts are in effect until Thursday night.