39Posts
Back to Top

Snow is moving into Tennessee on the FOX Weather 3D Radar

Track the snow moving into Tennessee on the FOX 3D Weather Radar. Download a free version of the app right now to follow the overnight movements of the winter storm.

The threat for disruptive ice exists from Columbia, South Carolina into the Triad of North Carolina on Sunday. Rain will start in the region overnight, which will transition into ice as temperatures drop. Duke Energy warns that power outages could be significant in the region.

Utility crews are standing by to respond: Click Here

Snow and ice are accumulating on some roadways in Arkansas. Roadways with snow are highlighted in blue and routes with slush are colored in pink. Many areas will pick upwards of three inches of snow overnight.

The FOX Weather 3D Radar is tracking freezing rain over Arkansas' capital city. The rain and ice is expected to transition into snow overnight. Upwards of three inches of snow could fall around the Little Rock metro area.

Metro Nashville will once again see a heavy blanket of snow. Forecast models show areas to the south of the city could pick up on half a foot of snow. The last winter storm that impacted the region happened just about a week ago.

Meteorologists say rain is expected to transition into snow on Sunday morning.

Rain has transitioned into snow over northern Arkansas and in the town of Mountain Home. Forecast models show upwards of five inches of snow could fall in the region, during the overnight hours.

Most of metro Atlanta will see snow totals of less than one inch. Areas to the north and northeast of the city could see substantially more frozen precipitation. Forecast models show areas around Gainesville, GA could see upwards of five inches of snow.

Winter Storm Warnings have been extended into the metro Atlanta region. Meteorologists expect upwards of two inches of snow, minor ice accumulations and wind gusts as high as on Sunday.

Moderate to occasionally heavy snow has begun to fall in northern parts of Arkansas. Forecast models show as much as 5 inches of snow could fall. Some roads southeast of Fayetteville, AR are reported to be snow-covered.

Travel not advised around Des Moines

Road conditions around the state of Iowa

Snowfall totals of around a foot in the Des Moines area has made travel nearly impossible on many roadways in the central part of the state.

Roads that are partially covered are in blue

Roads that are completely covered are in pink

Roadways, where travel is not advised, are in purple

Heavy snow with rates of 1-1.5 inches per hour will be possible through this evening in Missouri and Arkansas.

Rain will transition to snow from northwest to southeast late Saturday night and into early Sunday morning.

Precipitation will move east of the region by Sunday afternoon.

The Missouri State Highway Patrol said the snow has stopped in the St. Louis area.

Click the image above to watch live coverage from FOX Weather.

FOX Weather is tracking a high-impact winter storm that's going to affect two-thirds of the U.S. through Monday. More than 76 million people are under a winter storm alert Saturday morning. We are live in Iowa, Missouri, North Carolina and Tennessee.

Crews from the Kansas City, Missouri, Aviation Department and airlines were out before dawn Saturday to tackle the snow.  The airport said the airfield will be ready for the Pittsburg Steelers arrival for their bout with the Kansas City Chiefs on Sunday in the NFL wild-card game.

Snow is accumulating near Harrison, Arkansas, according to the Arkansas Department of Transportation.

Sections of the Midwest are under a Winter Storm Warning with the National Weather Service saying travel will likely be dangerous at times.

Here’s a look at the weather conditions in Columbia, Missouri, on Saturday morning.

Firefighters in Olathe, Kansas, are battling a house fire in the snowy conditions.

The call came in about 8:15 a.m. Saturday. When firefighters arrived they were met with significant fire conditions.

Three residents were taken to an area hospital and expected to surrive.

The highest snow report from this winter storm moving through the Midwest is from Des Moines, Iowa, with 14.3 inches.

Crashes begin to stack up on Missouri highways

Crashes are stacking up on Missouri highways, according to the Missouri State Highway Patrol.

Trooper are currently out on Interstate 49 between Harrisonville and Peculiar after a semi-truck jackknifed.

"Most all other counties have slide off / crashes were troopers are responding to," the patrol said in a tweet.

Winter storm impacts travel conditions for more than half of Missouri

The Missouri Department of Transportation said a lot has changed in just a few hours.

"The storm is now impacting travel conditions for more than half the state, including most major interstates and US routes," the department said in a tweet.

Be sure to give plows extra space as they work to clear the roads.

Snow-covered Iowa is waking up Saturday morning to some messy roads and bitter cold.

The Missouri Department of Transportation said drivers should use extreme caution if they must be out on the roads Saturday morning.

"Know the road conditions before you leave the house," MoDOT said in a tweet.

The winter storm dumping heavy snow across the Midwest on Saturday will soon reach the Southeast, where it will produce significant ice accumulations capable of downing trees and power lines in many areas.

Light snow continues across central Illinois, with snow now starting to decrease from the north.

Light mix of rain, snow falls in parts of Oklahoma

A light mix of rain and is snow falling in parts of eastern and far northeastern Oklahoma, according to the Oklahoma Department of Transportation.

Snow will spread southward through the day Saturday into portions of southern Missouri, southern Illinois, western Kentucky, eastern Kansas, eastern Oklahoma and northern and western Arkansas. The snow could be locally heavy at times in some areas.

FOX Weather's Hunter Davis is in Columbia, Missouri, to show us what it's like there.

FOX Weather is timing out this weekend winter storm so you can be prepared for how much snow you'll either have to shovel or how much ice you'll have to scrape off your car.

Snow crews in Merriam, Kansas, have been busy plowing across the city. They have been out on the streets since midnight, clearing about 2 inches of snow.

The National Weather Service in Kansas City expects another 1 to 2 inches of snow throughout Saturday morning. 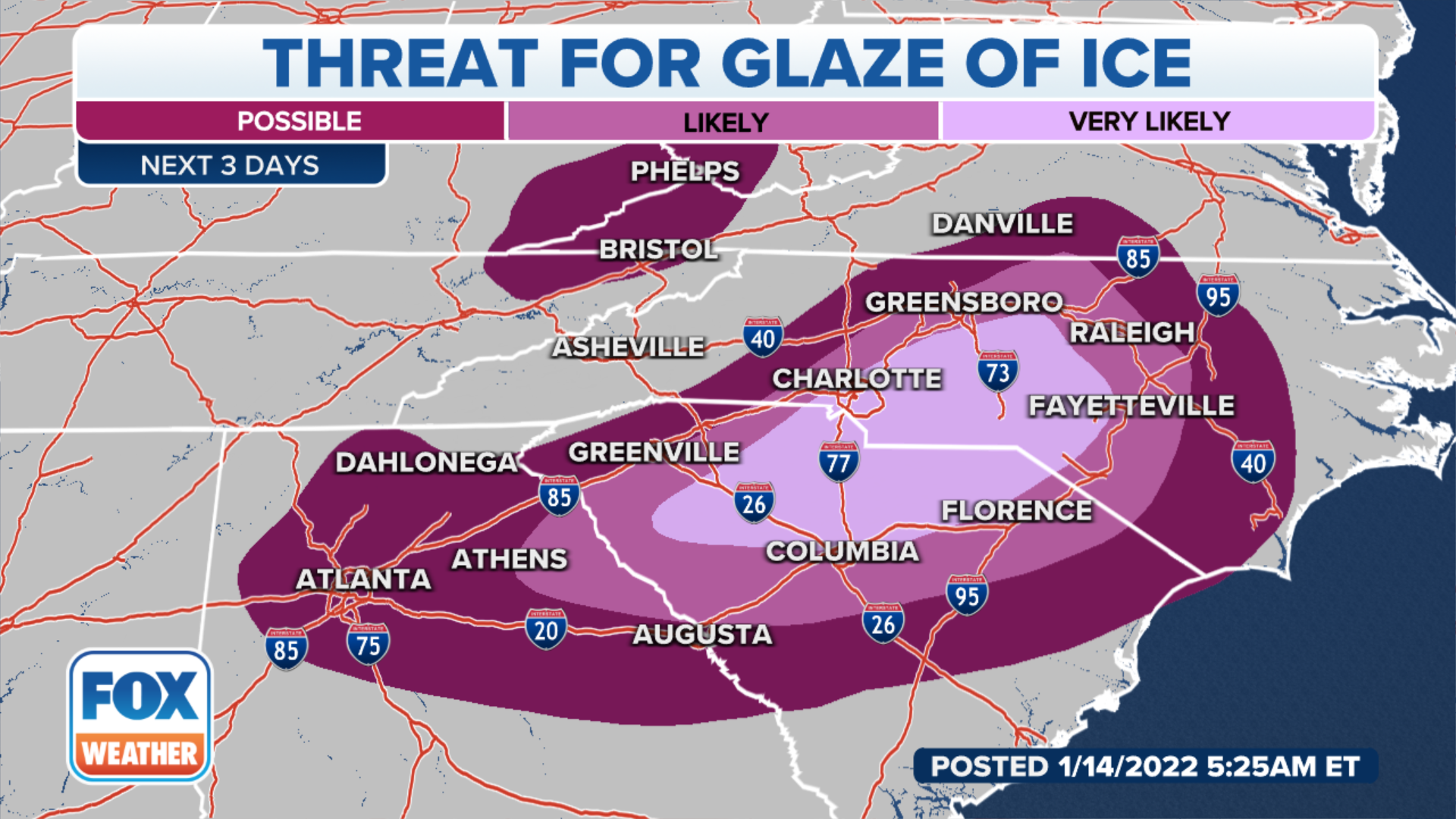 Snow is expected to come to an end by early Saturday afternoon in Kansas City, Missouri.

The National Weather Service said an additional 1 to 2 inches of snow is expected over the area.

A major winter storm currently impacting the Midwest will snarl travel as it tracks from the Midwest to the South and then up the East Coast with heavy snow, ice and strong winds through the Martin Luther King Jr. holiday weekend.