41Posts
Back to Top

A tornado-warned storm is moving through southern Maryland.

Severe storm threat centered over Plains during the weekend 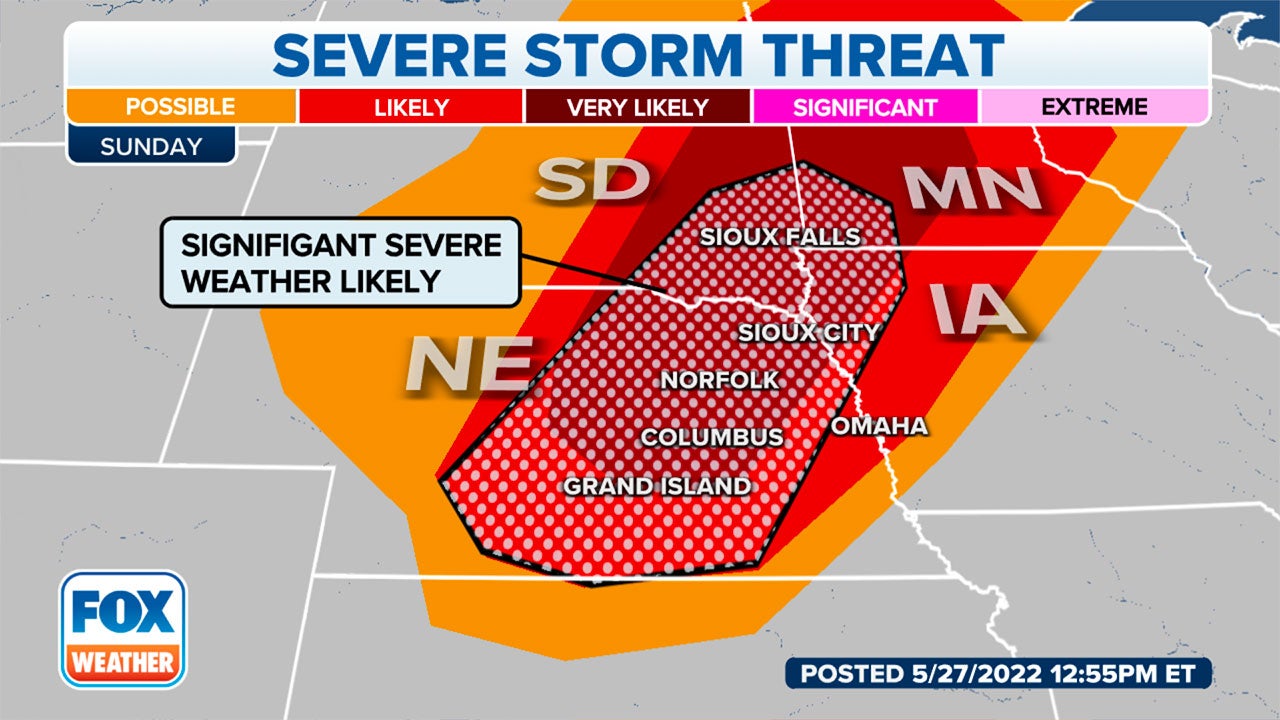 WEATHER NEWS
Northern Plains under threat of significant severe weather this weekend
People in the Northern Plains will have severe thunderstorms to contend with during their Memorial Day weekend.

The focus for severe storms over the Memorial Day weekend will be over the Plains.

A severe storm with a possible tornado is near King George, Virginia and is moving towards southern Maryland.

A tornado-warned storm is moving through central Virginia. Areas northwest of Richmond, Virginia are under a Tornado Warning.

A Tornado Warning has been issued for areas around Powhatan, VA because of a storm that is showing signs of rotation.

A Severe Thunderstorm Watch has been issued for parts of North and South Dakota until 9 p.m. MDT.

Meteorologists warn storms with damaging winds gusts to 80 mph will be possible through the evening.

Tornado Warning issued along I-95 in Virginia

A Tornado Warning has been issued for areas north of Richmond, along I-95 in Virginia.

A round of strong storms moved through the New York City metro region on Friday afternoon.

Severe Thunderstorm Watch issued for parts of mid-Atlantic through 10 p.m.

A Severe Thunderstorm Watch has been issued for parts of the mid-Atlantic through 10 p.m. Meteorologists say large hail, damaging winds and isolated tornadoes are possible.

A Tornado Warning has been issued for areas southeast of Lynchburg in Virginia. The National Weather Service is monitoring the storm for the potential of a tornado and quarter-size hail.

The National Weather Service has issued a Tornado Warning for areas southeast of Raleigh for a storm with rotation.

A Tornado Warning has been issued for the metro Raleigh region of North Carolina.

A Severe Thunderstorm Warning has been issued for the New York City area, covering nearly 10 million people. The warning is in effect until 5:45 p.m. Eastern. The National Weather Service said the storm could produce winds of 60 mph and penny-sized hail. Heavy rain is also likely. People should stay inside and away from windows until the storm passes.

Severe thunderstorms and the possibility of tornadoes could develop from the Carolinas into the Mid-Atlantic.

Strong storms are approaching New York City. While there are no warnings on these storms at this time, people can expect heavy rain and gusty winds as they move through the area. It's best to stay inside until these storms pass.

The NWS in Wilmington, SC has issued a Tornado Warning until 5 p.m. for northwest Horry County and south central Marion County.

A line of severe thunderstorms is moving northeast bringing the threat for tornadoes.

West central Ocean County and east central Burlington County in New Jersey were briefly under a Tornado Watch that was canceled by the NWS.

The area remains under a Severe Thunderstorm Warning until 4:30 p.m.

A severe thunderstorm over Chatsworth is moving northeast at 50 mph. Wind gusts up to 60 mph and penny size hail are the primary threats.

The Tornado Watch that was in effect for parts of several mid-Atlantic states until Friday evening has been canceled. The bulk of the line that was causing the severe weather has moved offshore.

A Severe Thunderstorm Watch issued for parts of the Delmarva Peninsula, Pennsylvania and New Jersey until 7 p.m. remains in effect.

The NWS in Mount Holly, New Jersey has issued a Tornado Warning for Camden County and Burlington County in southern New Jersey.

The active threat continues until 4 p.m. ET as the storm moves northeast at 50 mph.

FOX Weather meteorologist Kendall Smith has an update on the forecast for severe weather moving through the mid-Atlantic and Northeast.

Tornado Watch continues until 6 p.m. for areas in Maryland, Virginia and North Carolina

The NWS Storm Prediction Center has issued a Tornado Watch for parts of southern Maryland, eastern North Carolina, eastern Virginia and off the coast.

The watch continues until 6 p.m. ET.

This video shows the heavy downpour in Forest Hill, Maryland as strong storms moved through the area.

Listen to the thunder rumble in this video recorded by Samantha Weiss in Boiling Springs, SC as storms rolled through the area on Friday morning.

As thunderstorms approached, a gloomy sky with dark clouds moved over Oxford, Maryland.

Eastbound traffic on the Chesapeake Bay Bridge is delayed due to high wind and rain moving through the area.

A Tornado Warning is underway until 2 p.m. for Bel Air North in northeast Hardford County, Maryland.

Strong storms continue to move through the Mid-Atlantic region.

Ground stops issued earlier because of storms at Regan Washington National (DCA) and Baltimore-Washington International (BWI) airports have been lifted. However, the FAA is reporting delays of about a half-hour at both airports.

Severe thunderstorms with heavy rain and wind will continue into the evening commute. The Maryland MTA is asking commuters to plan ahead and allow for extra time.

Philadelphia has been included in a Severe Thunderstorm Watch that has been issued until 7 p.m. for much of the mid-Atlantic. The watch covers Delaware, eastern Maryland, southern and western New Jersey, southeastern Pennsylvania and coastal waters.

People who live in these areas should watch for damaging wind and tornadoes that could happen as a result of storms moving through the region.

Severe weather happening from Central Pennsylvania down to Virginia Beach

Nearly 20 million people are under an active Tornado Watch. Click here to see the latest forecast.

The warning remains active until 1:15 p.m.

Residents in the area should take cover now. A severe thunderstorm is moving northeast at 30 mph.

63 mph gust was reported during a thunderstorm in Dahlgren, Virginia.  Also, multiple trees were reported blown down in the Franklin Farms area of Chantilly, Virginia, according to National Weather Service storm reports.

Two mobile homes were destroyed, at least 20 homes were damaged and numerous trees were uprooted in the Crockett Road area as the storm blew through about 7:30 a.m., according to the National Weather Service. 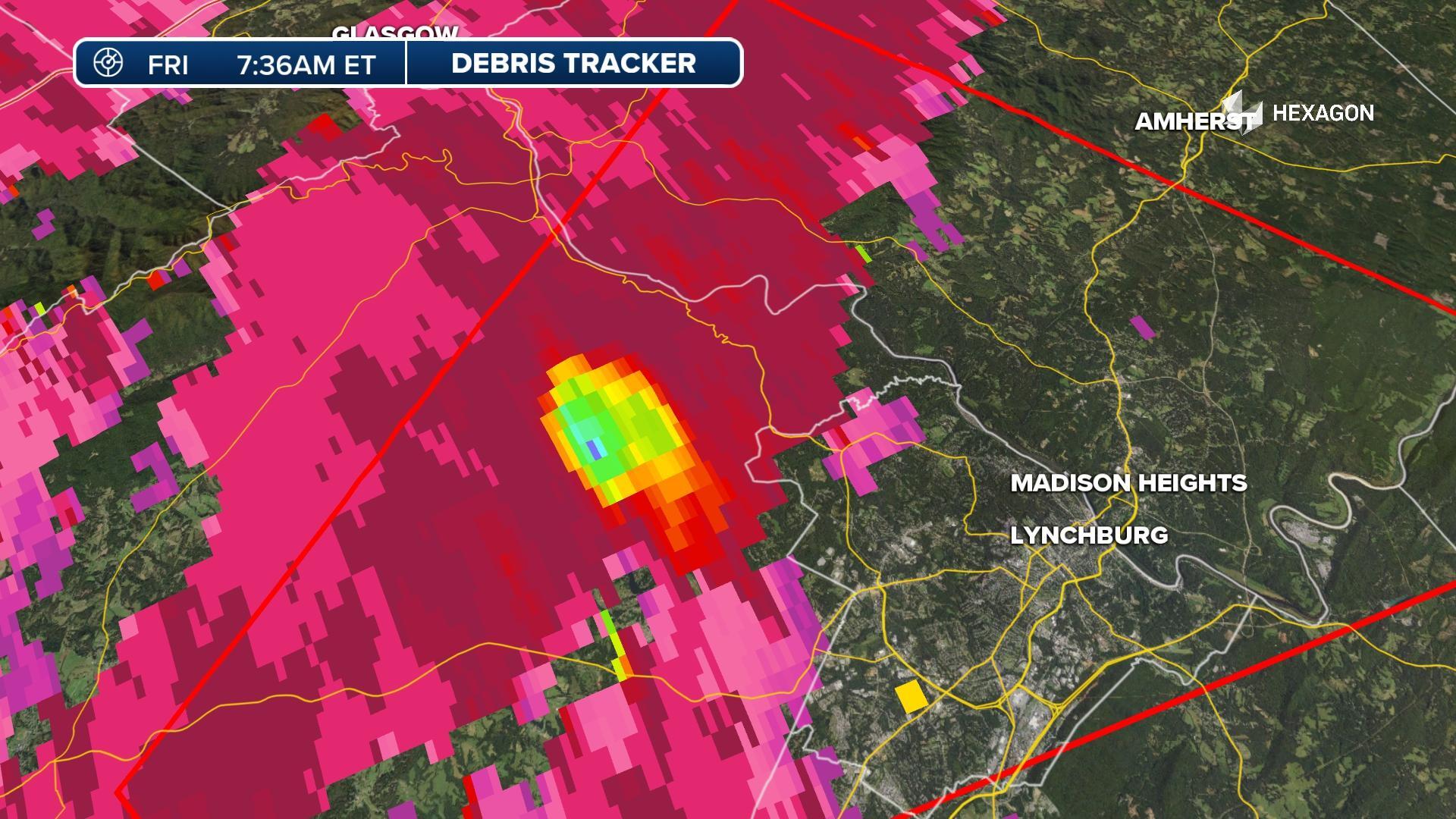 A Tornado Warning has been issued just north of Washington, D.C. in Howard County, MD as it moves eastward.

The NWS has issued a Tornado Warning for north central Carroll County, Maryland until 1 p.m.

A line of severe thunderstorms over Taneytown is moving northwest at 40 mph.