71Posts
Back to Top

Utility providers warn it could take several days to restore power in Iowa.

VIDEO: Damage from Plains into Midwest

Storms could push into the Chicago region after midnight.

Storm spotters captured video of a tornado near the I-80 corridor in central Iowa.

First tornado warning ever during December issued in Minnesota

For the first time since at least 1986, areas in southern Minnesota were placed under a tornado warning. The rotation in the storm was picked up on doppler radar. So far, there have been no reports that a tornado formed over the state.

Chart of peak gusts around Colorado, including 107 mph at Lamar

Peak wind gusts around Wyoming, including 75 mph in Cheyenne

Wind gusts of more than 70 mph brought down trees and powerlines in the Kansas City metro area.

A storm report into the National Weather Service notes that the roof of a hangar at Kansas City's Charles B. Wheeler Downtown Airport was ripped off during wind gusts up to 77 mph.

Power Outages across the U.S.

Strong winds, severe storms and thunderstorms knocked out power to over 303,174 homes and businesses.

UPDATE: Severe thunderstorms have passed Kansas City and air traffic controllers have returned to the tower. Airport operations are set to resume shortly.

VIDEO: semi-trailer truck flips in high winds along I-80

Several trucks were flipped during the high winds along Interstate 80 in Nebraska. A trooper's dashcam caught one of the accidents on camera.

A line of severe storms has moved into central Iowa. Winds could reach more than 60 mph within the storms.

A Severe Thunderstorm Watch now covers a significant portion of Missouri until 12 a.m. CDT. The primary threats from the southern end of the storms are damaging winds.

Severe thunderstorms are pushing into the Kansas City metro with potentially damaging winds.

More than 9 million under Tornado Watch

Tornado Watches have been extended to include portions of the upper Mississippi River Valley. The alerts are in effect until midnight.

Here's the difference between a watch and a warning: CLICK HERE

Watch: Angry skies in Des Moines as clouds fly by ahead of storm

The National Weather Service Office in the Quad Cities launched a weather balloon to help determine the state of the atmosphere and if the severe weather will hold together and make it into eastern Iowa.

More than one dozen Severe Thunderstorm and Tornado Warnings stretch from Kansas to northern Iowa as a line of severe thunderstorms capable of damaging winds and tornadoes moves eastward.

Several parts of the state of Kansas are seeing poor air quality that ranges from unhealthy to hazardous. Meteorologists say the storm system is kicking up dust and other particulates into the air.

Several reporting sites in Kansas reported wind gusts greater than 80 mph. The wind gusts are of the strength typically found in a category one hurricane.

A wind gust hit 82 mph in Sioux City, Iowa while the wind hit 74 mph in Omaha.

Ominous clouds are seen in Sloan, Iowa, where there is a Tornado Warning for the city.

The National Weather Service says that this storm has shown rotation.

Russell, Kansas has reported a peak gust of 100 mph, while Fort Riley had a gust of 94 mph.

A rain and snow squall moved through central Colorado on Wednesday afternoon. Jeff Dion captured timelapse video of the event.

About 160,000 people have lost power in stormy weather Wednesday, including about 103,000 in Colorado, according to poweroutage.us

Video of I-70 in Kansas as severe storms move through

The Kansas Department of Transportation shows a view of what it is like to drive through the severe storms. Watch as the camera shakes and heavy rain batter the road in Solomon at exit 266.

Troopers warn against travel on I-80

The storm system is creating tough travel weather and low visibilities along I-80 in Nebraska. 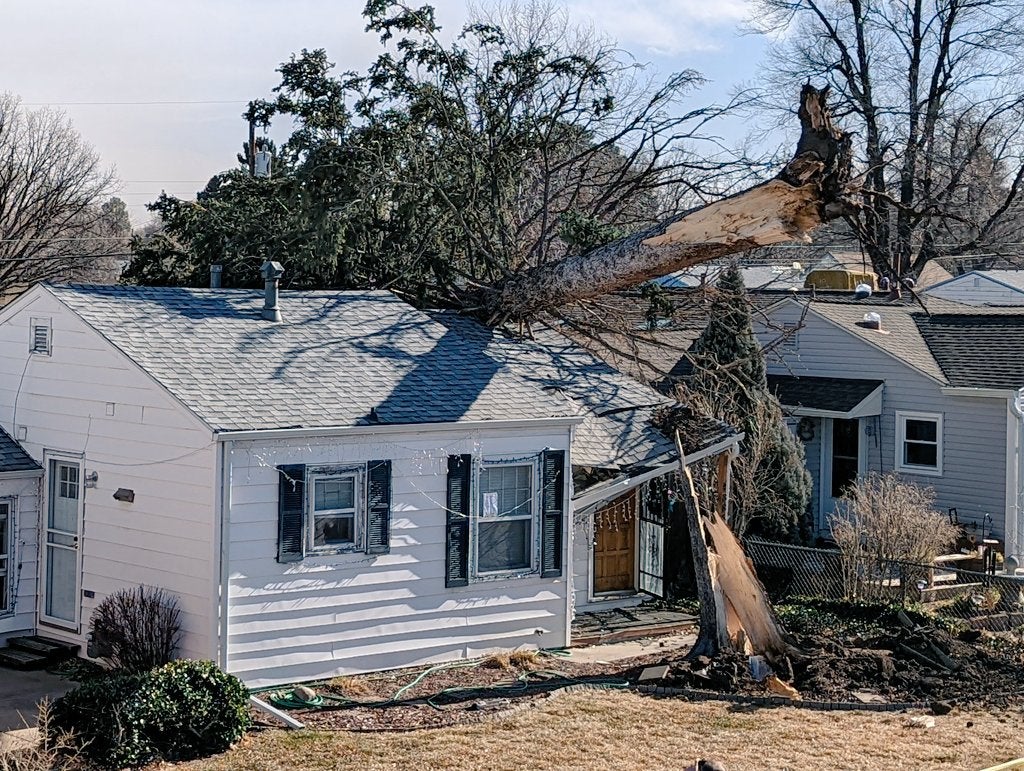 Dodge City has reported a wind gust of 84 mph

A line of severe storms are currently moving through Nebraska and Kansas as this hour. The Severe Thunderstorm Warning was issued due to 70mph wind gusts and nickel size hail.

Satellite image showing dust blowing amid the storms in Kansas

From the National Weather Service: "Satellite imagery of this impressive wind storm. All the pink is dust. All the green are regular clouds. All the blue is ground. All the black are high clouds."

Multiple roads in western Kansas have been closed, including I-70 from the Colorado state line to Russell.

Any tornadoes that form, could result in EF-2 range, NWS says

The National Weather Service out of Des Moines, Iowa, says that if any tornadoes were to form today, they could become in the EF-2 range due to the already present high winds.

"Should any tornadoes develop, it would not take a very strong rotation to push the wind on the right side of the tornado movement into the EF2 range considering any storm motion that would already be 80 mph," the NWS Des Moines says.

Caldwell High School in Kansas has part of its gymnasium roof ripped away.

It is raining mud with showers amid a dust storm near Damar, Kansas, a spotter reports to the National Weather Service office in Goodland, Kansas.

NWS Omaha: Do not wait to take shelter

Tornadoes forming along line of severe weather rolling across Nebraska

Home under transport blown off trailer in SD

UPDATE: Home blown off trailer along South Dakota's Highway 44 in Pennington County has been clear.

A tornado warning is in effect for central Buffalo County, Nebraska until 2 p.m. Central

A tornado warning is in effect for central Clay County, Nebraska, until 2 p.m. Central

A tornado warning is in effect for central Adams County in Nebraska until 2 p.m.

Denver Fire Department reports tree damage in Englewood, Colorado, including a tree that fell into a home.

A tornado warning is in effect for parts of Nebraska until 1:45 p.m. Central

A tornado watch is in effect until 8 p.m. Central

A tornado watch has been issued for parts of Iowa, Kansas, Minnesota, Missouri, Nebraska and South Dakota until 8 p.m. Central

"Don't panic. But we want you to be prepared for damaging winds and a threat of tornadoes after 3pm," National Weather Service meteorologists in Omaha are warning eastern Nebraska residents.

Omaha meteorologists launched a special weather balloon at 1pm CST to get a current measurement of the upper levels of the atmosphere.

Taos: (5:15 a.m. PST) Radio tower downed taking out power lines for northern half of town. Mobile home blown off foundation along with another burned down. Several roofs blown off homes and businesses. Several trees down in the area blocking roads and on top of roads.

The warning is in effect until 1:30 p.m. Central 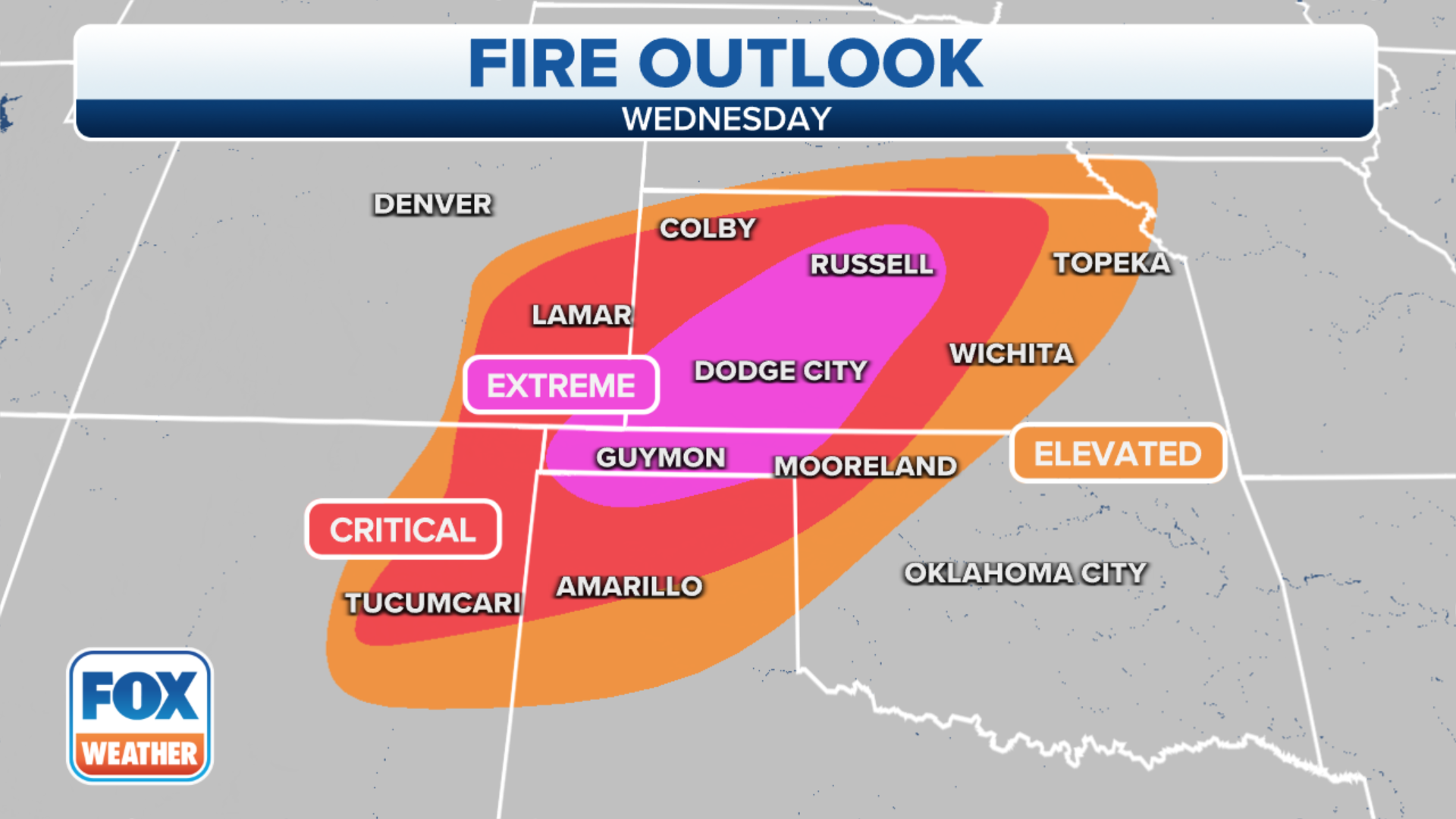 The "Extremely Critical Risk" fire weather category has never been issued in December before. 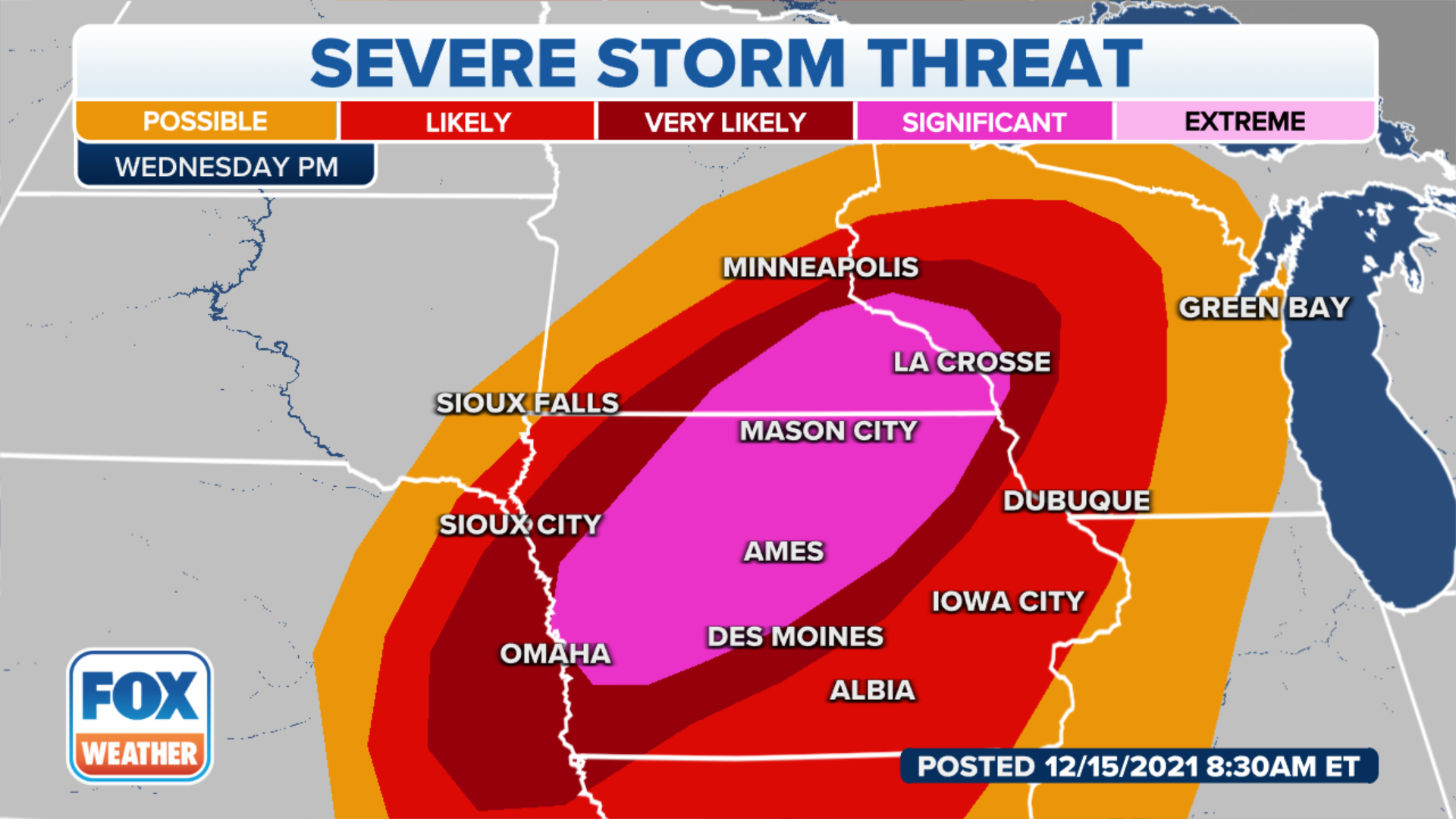 WEATHER NEWS
'Moderate Risk' of severe weather issued in Minnesota, Iowa, Wisconsin: Destructive winds, tornadoes likely
An outbreak of severe thunderstorms will produce destructive wind gusts and a few nighttime tornadoes, some of which may be strong, in parts of the upper Midwest on Wednesday evening.

Pierceville, Kansas has reported a gust of 84 mph so far today. Goodland and Big Bow have both reported gusts of 73 mph.

The temperature hit 71 degrees at the airport, breaking the previous record of 69 degrees set in 2017

Travel is extremely dangerous over the far eastern Plains as the dust storm advances.

Video from the National Weather Service in Goodland, Kansas, shows blowing dust associated with powerful winds across the region.

A dust storm warning is in effect until 1:45 p.m. Central

Iowa State University will partially shut down at noon on Wednesday, Dec. 15 due to the forecast severe weather.

"Employees – especially those who commute from outside Ames – are urged to leave at noon and coordinate with their supervisors to work from home, take leave or make up time within the work week," according to a news release.

Early dismissal for some Iowa schools due to wind

Due to the forecast winds, the Sioux City Community School District announced it will dismiss students two hours early.

Several wind gusts over 75 mph have been reported in Colorado Wednesday morning, including 107 mph in Lamar and 91 mph in Westcliffe.