Wreckage of the 'Industry' found

The wreckage of the only known whaling ship to have sunk in the Gulf of Mexico has been found.

The wreckage of the only whaling ship known to have sunk in the Gulf of Mexico has been found, and it’s providing new insight into the history of one of America’s oldest industries.

Built in 1815 in Westport, Massachusetts, the "Industry" hunted mainly sperm whales for 20 years across the Atlantic, the Caribbean and the Gulf of Mexico. It sank on May 26, 1836, about 70 miles from the mouth of the Mississippi River, when a storm snapped its two masts and split open its wooden hull.

The mosaic of images from the NOAA video of the brig Industry shipwreck in the Gulf of Mexico, February 25, 2022, shows the outline in sediment and debris of the wooden hull of the 64-foot by 20-foot whaling brig. The tryworks and two anchors are also visible. A third anchor is buried in the sediment near the tryworks. Mosaic was created by the Bureau of Ocean Energy Management using NOAA ROV video footage.
(Bureau of Ocean Energy Management)

According to a news release from the National Oceanic and Atmospheric Administration’s Ocean Exploration, the wreckage of the 64-foot-long brig was found about 150 miles south of Pascagoula, Mississippi, about 6,000 below the water’s surface. NOAA worked with SEARCH, Inc. and the U.S. Bureau of Ocean Energy Management to find and identify the wreck. 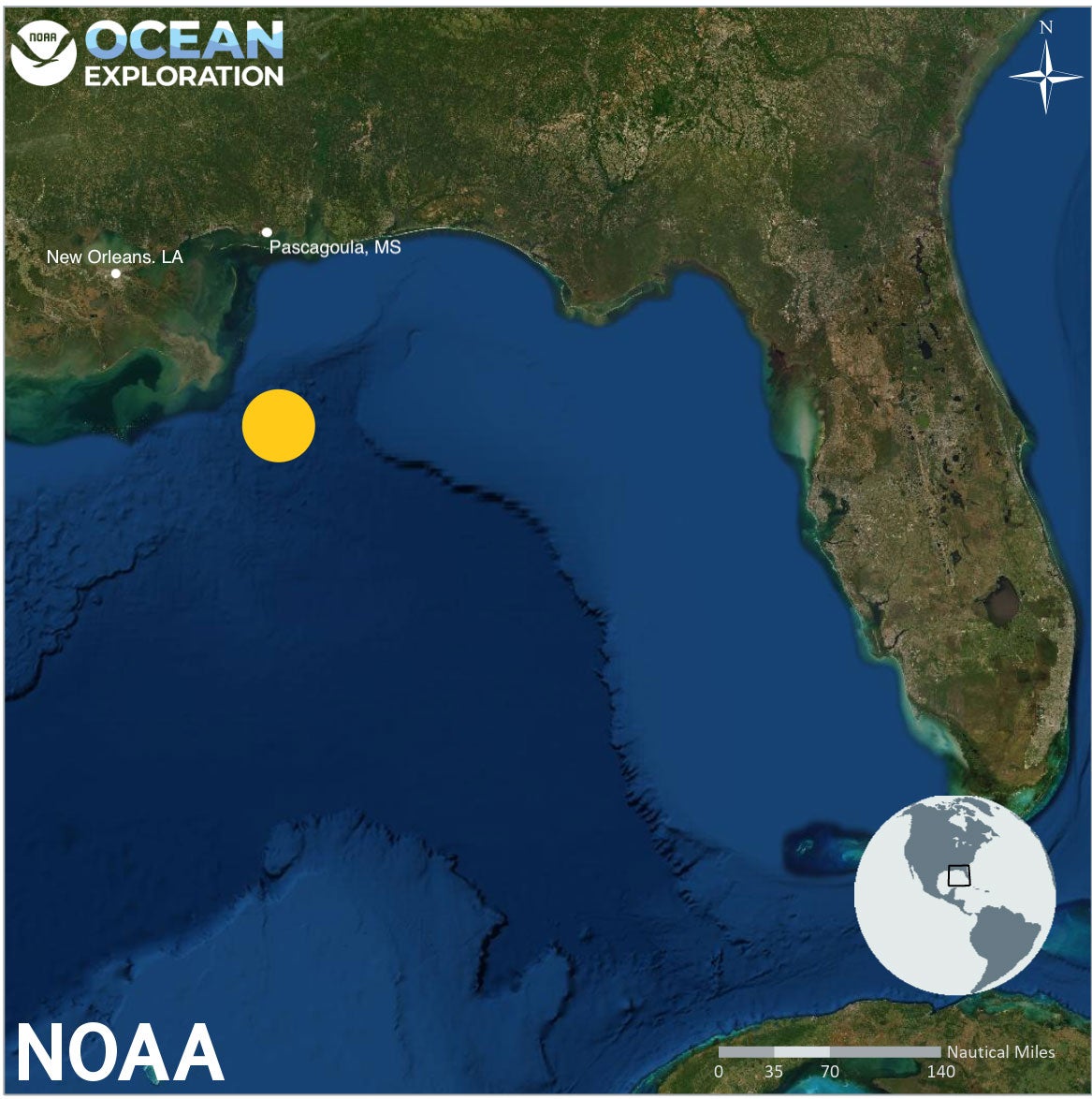 "Industry" was unique in that Black and Native American people served as the essential crew on many of its voyages, according to NOAA. The manifest for the voyage when it sank was lost, but previous lists showed both the crew and officers were made up of Black, Native America, White and multiracial people.

"Today we celebrate the discovery of a lost ship that will help us better understand the rich story of how people of color succeeded as captains and crew members in the nascent American whaling industry of the early 1800s," said NOAA Administrator Rick Spinrad, Ph.D. "The discovery reflects how African Americans and Native Americans prospered in the ocean economy despite facing discrimination and other injustices. It is also an example of how important partnerships of federal agencies and local communities are to uncovering and documenting our nation’s maritime history."

This image of an anchor was taken from the 1836 shipwreck site of brig Industry in the Gulf of Mexico by the NOAA ROV deployed from NOAA Ship Okeanos Explorer on February 25, 2022.

Officials said they plan to nominate the site of the wreckage for the National Register of Historic Places.

What happened to the crew?

NOAA officials said a researcher at the Westport Free Public Library found a June 17, 1836, article in the Nantucket Inquirer and Mirror that said the crew of the "Industry" was rescued by another ship out of Westport called the "Elizabeth," and returned them safely back to Westport.

"This was so fortunate for the men onboard," said James Delgado, Ph.D., senior vice president of SEARCH Inc., who worked closely with the researcher and several other historians to identify the wreckage. "If the Black crewmen had tried to go ashore, they would have been jailed under local laws. And if they could not pay for their keep while in prison, they would have been sold into slavery."

Another whaling ship from Massachusetts was able to remove 230 barrels of whale oil, parts of the rigging and one of the ship’s four anchors before "Industry" went below the surface of the water.

This image of the tryworks was taken from the shipwreck site of brig Industry by a NOAA ROV. The tryworks was a cast iron stove with two deep kettles used to render whale blubber into oil. It was manufactured by G &amp; W Ashbridge, a Philadelphia company.