The WeatherStem observation system in Panama City, FL is reporting 3" hour rain rates and wind gusts around 64 mph as a tornado-warned storm moves by.

Visibility is near-zero at times because of the heavy rainfall.

Atmore, AL tornado: 'A lot of debris to search through tonight'

FOX Weather 3D Radar is tracking a storm with rotation along Interstate 10 that has triggered a Tornado Warning for several counties in the Florida Panhandle.

Holmes, Walton and Washington counties are under the Tornado Warning until 4 p.m. CDT.

At least 2 people injured during the storms 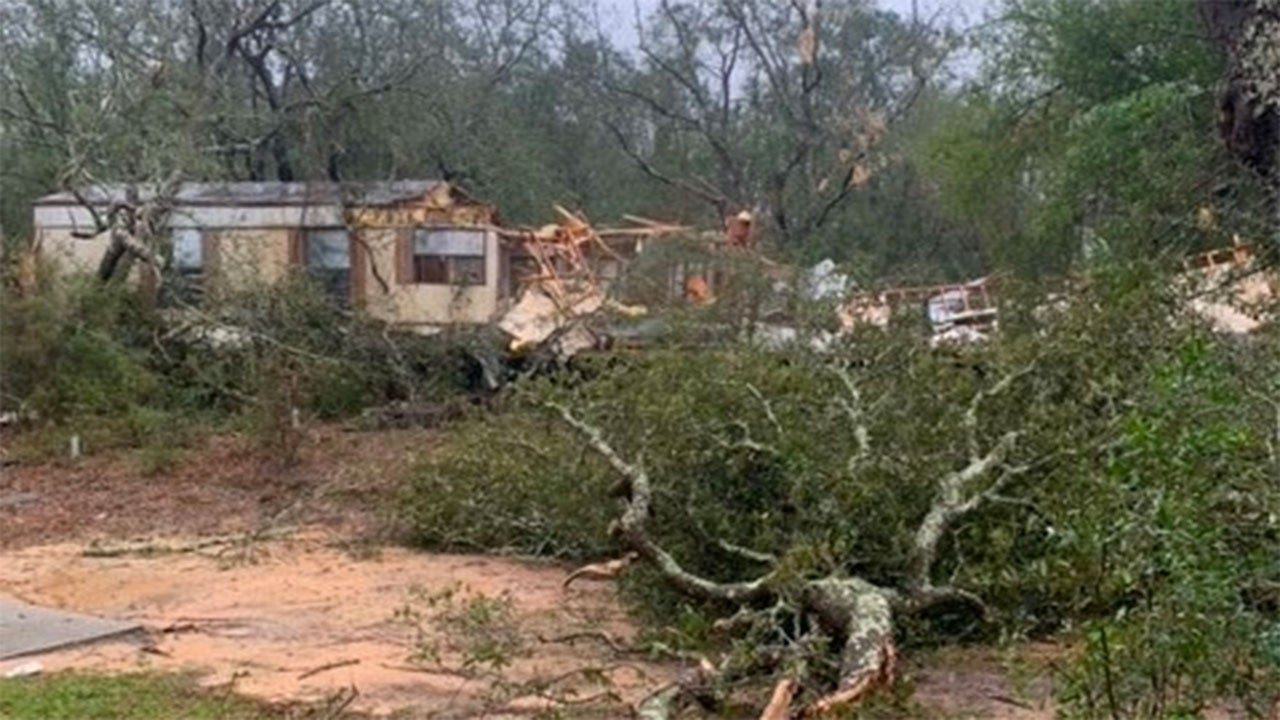 Heavy rain is falling over areas of Alabama, Florida and Georgia that desperately needed it. Several flood warnings and advisories are in effect for low-lying and poor drainage areas.

Parts of the area have only seen around 50% of their usual rainfall during the last 30 days.

Deputies with the Okaloosa County, Florida, Sheriff's Office have been checking for damage following reports of a possible tornado in the Log Lake Road of Holt.

There are multiple trees down but no reports of any injuries at this time.

Tornado Warning issued for areas near Decatur, Mitchell and Seminole counties in Georgia until 3 p.m. Eastern.

NASCAR cancels Friday practices in Atlanta due to weather

Rain clouds hang over the racetrack prior to the NASCAR Sprint Cup Series AdvoCare 500 at Atlanta Motor Speedway on September 4, 2011 in Hampton, Georgia. (Chris Graythen/Getty Images)

NASCAR has canceled Friday’s on-track activity at Atlanta Motor Speedway due to weather in the Hampton, Georgia, area.

Rain hit the 1.54-mile track well before haulers unloaded and continued into the afternoon with no clearing in sight.

All three NASCAR national series were scheduled to practice, starting with the Camping World Truck Series at 3:05 p.m. Eastern.

A tornado warning has been issued for Okaloosa County, Florida, until 1:15 p.m. The circulation was located near I-10 and Holt and was moving east at 35 mph. People inside the warned area should seek shelter immediately.

At least 2 injured, 9 mobile homes damaged by storm in Alabama

At least two people were injured and nine mobile homes were damaged by a storm in Atmore, Alabama on Friday.

Video from WALA showed power crews were working to repair power lines in Escambia County, Alabama, that were also damaged by the storm.

Officials said they are still trying to determine whether a tornado was to blame for the damage.

A strong low-pressure system is tracking eastward and will spawn a couple more rounds of severe thunderstorms packing threats of tornadoes, damaging winds and large hail Friday and Saturday across portions of the southern and eastern U.S. Click here to read more.

Alabama prepares for second round of severe weather

Tornado Watches issued for parts of the Gulf Coast, Southeast

NOAA's Storm Prediction Center has issued Tornado Watches for parts of the Gulf Coast and Southeast.

-A Tornado Watch is valid until 2 p.m. Central time for southern Alabama and the western Florida Panhandle, including the cities of Andalusia in Alabama and Pensacola in Florida.

-A Tornado Watch is valid until 7 p.m. Eastern time (6 p.m. Central time) for southeastern Alabama, the Florida Panhandle and southwestern Georgia, including the cities of Dothan in Alabama, Panama City in Florida and Albany in Georgia.

The SPC says a couple of strong tornadoes are possible in these areas, in addition to scattered damaging wind gusts up to 70 mph.

A tree has been reported as knocked down in Covington County, Alabama. According to county officials, a large tree has fallen across Sunny Side Street in the River Falls area.

At least six severe thunderstorm warnings have been issued across southern Alabama and the Florida Panhandle as a powerful line of storms moves east. A tornado watch is also in effect for the area.

The NWS in Mobile has issued a Tornado Warning for Conecuh County and Escambia County, Alabama until 11:15 AM CT.