42Posts
Back to Top

More than 55,000 in Binghamton without power

In the Binghamton area roughly 55,700 are without power, according to NYSEG.

High winds from a powerful nor'easter knocked a tree down in a Washington, DC neighborhood on Tuesday, April 19.

NOAA posted this timelapse satellite loop showing the path of the powerful late-season nor'easter that has brought gusty wind, localized heavy rain and snow, coastal flooding and rough seas to parts of the eastern U.S. since Monday.

Nearly 200,000 people in New York are without power Tuesday after a nor’easter dumped heavy snow on a large part of the state.

Radar estimates show the heaviest snow fell in a swath from the Binghamton area in the south to near the Lake Placid area in the north. Some of the highest snowfall reports are centered near Binghamton, where as much as 15 inches of snow has been reported to the northeast of the city. 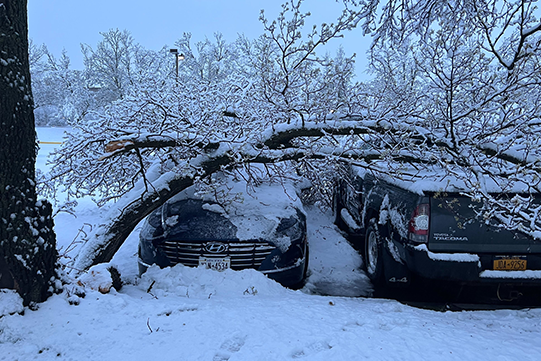 WEATHER NEWS
‘Trees everywhere’: Nearly 200K New Yorkers without power after heavy snow from nor’easter
Nearly 200,000 people in New York are without power Tuesday after a nor’easter dumped heavy snow on a large swath of the state.
Posted by Chris Oberholtz Share

All classes at Hartwick College, located in Oneonta, New York, have been canceled Tuesday due to power outages.

Here's how to protect your plants from frost, cold

Binghamton, New York, broke its all-time April record for two-day snowfall with over 14 inches of snow.

Some New Yorkers reported the sounds of branches snapping under an April snow after a late-season Nor'easter knocked out power to thousands.

Ice or snow can cause tree branches to fall under the added weight, but this late in the spring, additional factors increase those chances of breakages. 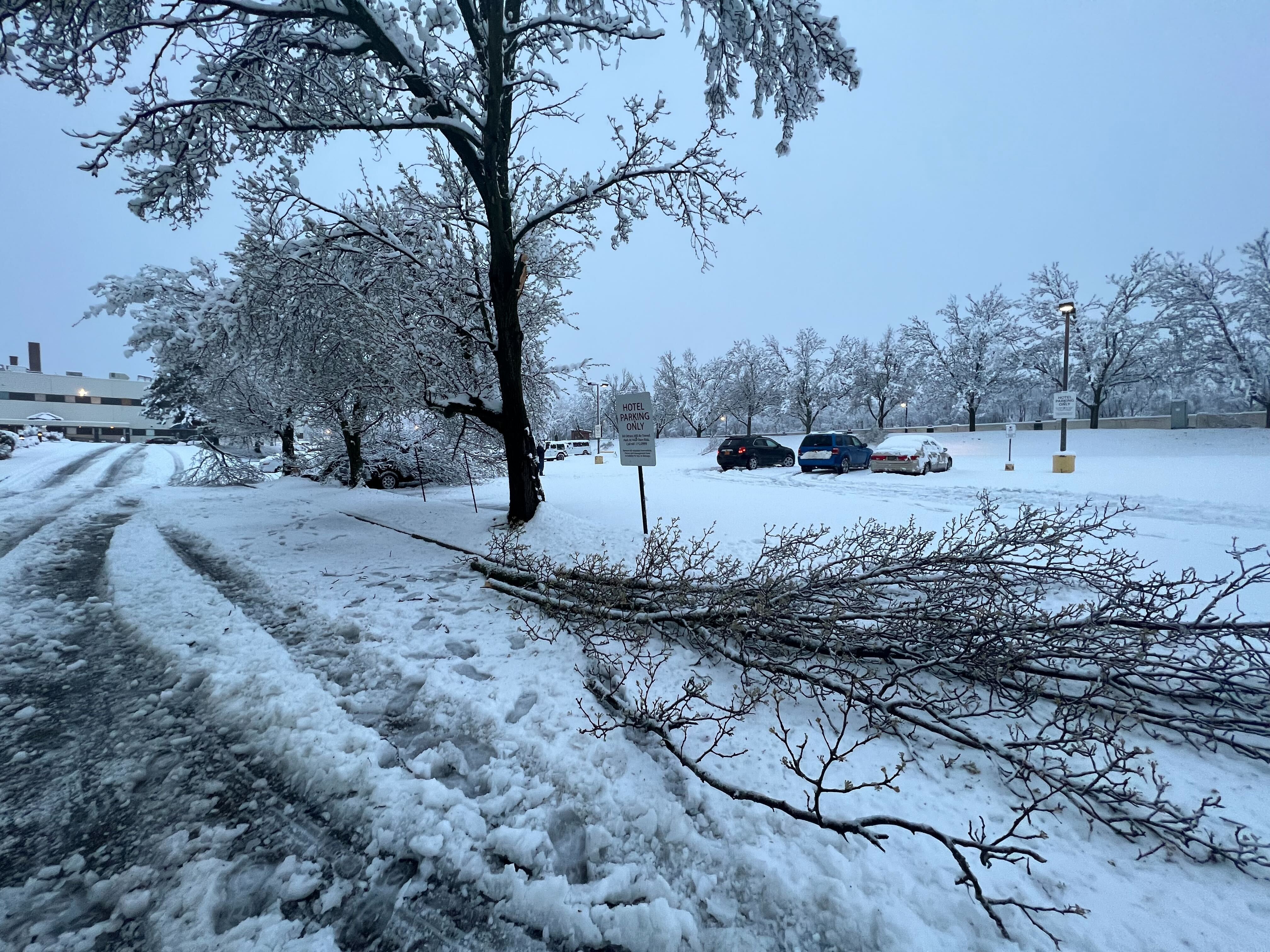 LEARN
Why late spring snow weighs heavier on tree branches causing limbs to break
Some New Yorkers reported the sounds of branches snapping under an April snow after a late-season Nor'easter knocked out power to thousands.
Posted by Chris Oberholtz Share 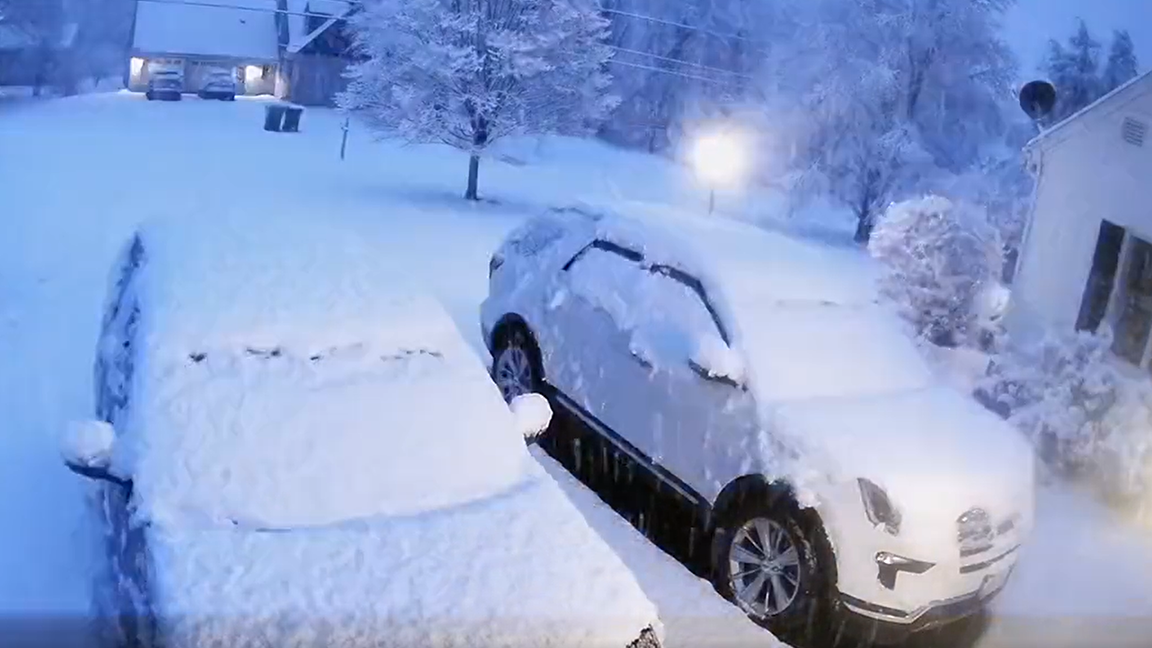 Watch: Transformer goes up in flames during powerful nor'easter

Check out this video of a transformer going up in flames during the powerful late-season nor’easter in Vestal, New York.

A spokesperson for the Broome County Executive says power restoration will take at least a couple days, with at least half of the county’s residents without power. Their office is about to survey damage from the storm.

FOX Weather Digital Content Producer Brian Donegan lost power at his home in Berkshire, NY, early Tuesday morning as a nor'easter slammed the area with heavy and wet snow. Click here to listen to his interview.

Amtrak train stopped in Utica, New York, due to downed trees along route

The latest: Late-season nor'easter bringing snow, rain to the Northeast

A strong late-season nor'easter is bringing significant impacts to parts of the interior Northeast, where up to a foot of snow has already piled up in many parts of the higher terrain.

While it's not uncommon for interior portions of the Northeast to receive snowfall in April, it is getting late in the season for such a widespread snowstorm that has dumped several inches of heavy, wet snow in the lower elevations. 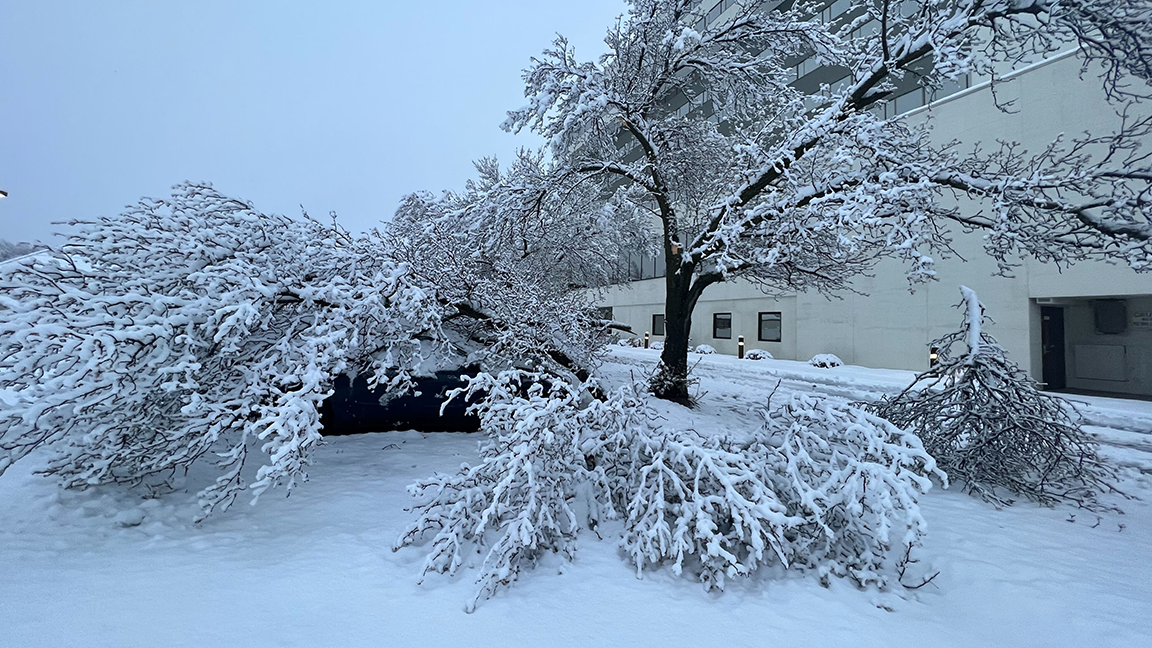 WEATHER NEWS
Late-season nor’easter dumps heavy snow, rain across the Northeast
A strong late-season nor'easter is bringing significant impacts to parts of the interior Northeast, where up to a foot of snow has already piled up in many parts of the higher terrain.
Posted by Chris Oberholtz Share

Thundersnow is being reported near the Cleveland Hopkins International Airport in Ohio.

Why is it quieter after a snowstorm?

Have you ever noticed it gets quieter after a snowstorm?

Maybe it's the lack of people driving on the snow-covered roads or the calm as you watch the snowflakes peacefully fall, but the silence after a snowstorm isn’t something that you’re imagining. Science shows that it is indeed quieter after a snowstorm. Click here to read more. 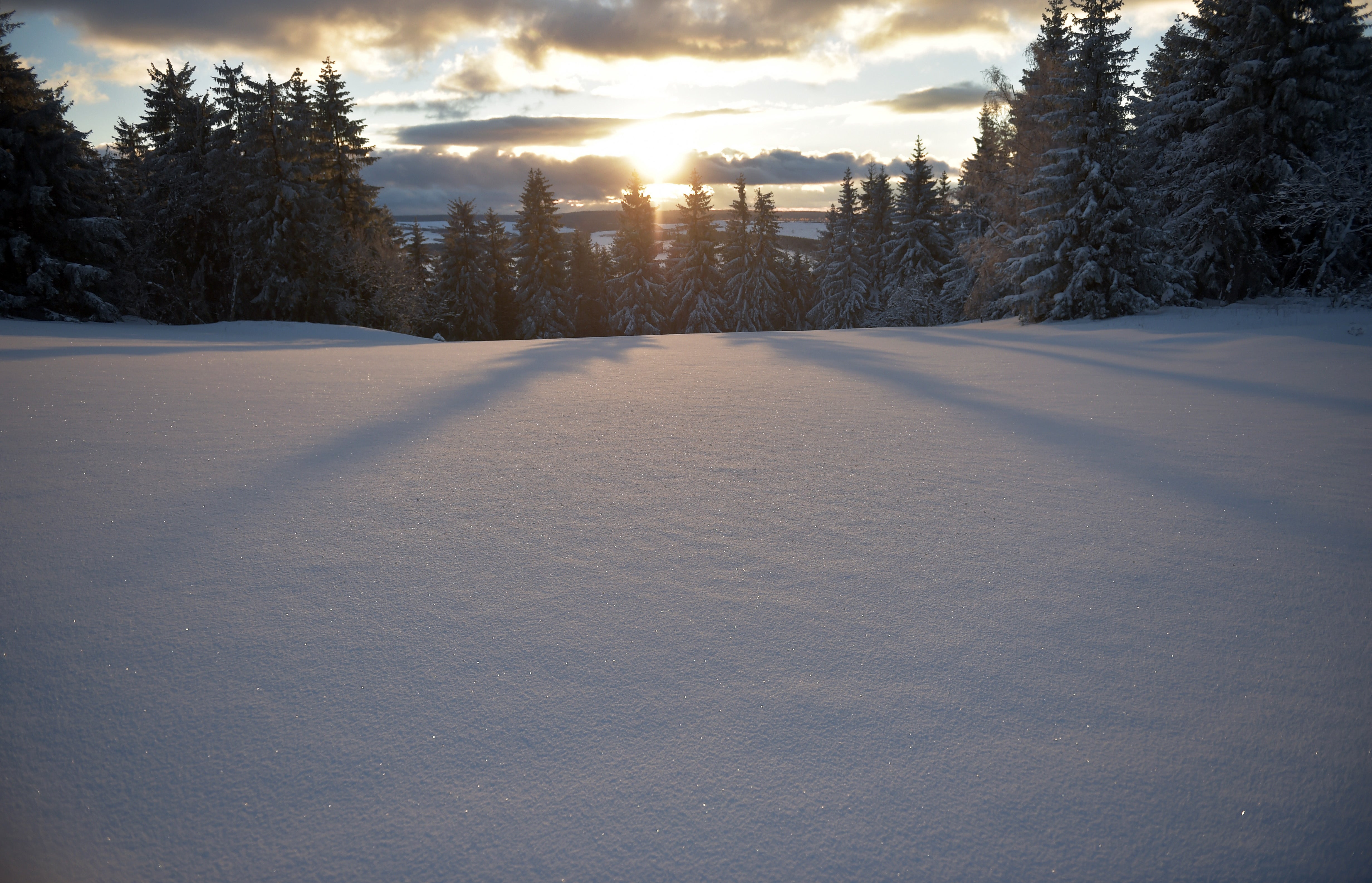 What makes a storm a nor’easter?

Not every Northeast snowstorm is a nor’easter. In fact, some nor’easters don’t even produce snow.

A nor’easter is a strong low-pressure system that impacts the East Coast of the United States, particularly the Northeast, but that’s not what makes it a nor’easter. 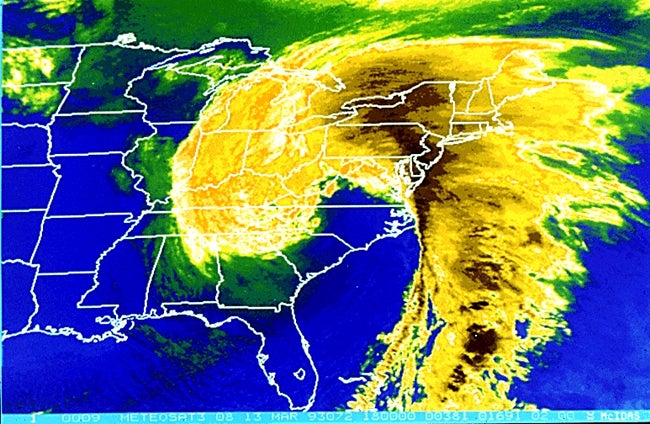 LEARN
What makes a storm a nor’easter?
There’s one key component that determines if a storm meets the criteria for a nor'easter.
Posted by Chris Oberholtz Share

Thundersnow: What causes it?

Most people associate thunder and lightning with thunderstorms, but you shouldn't be surprised if you hear a rumble or two coming from the sky during heavy snowfall.

FOX Weather meteorologist Marissa Lautenbacher says while thundersnow is a rare phenomenon, it can happen. 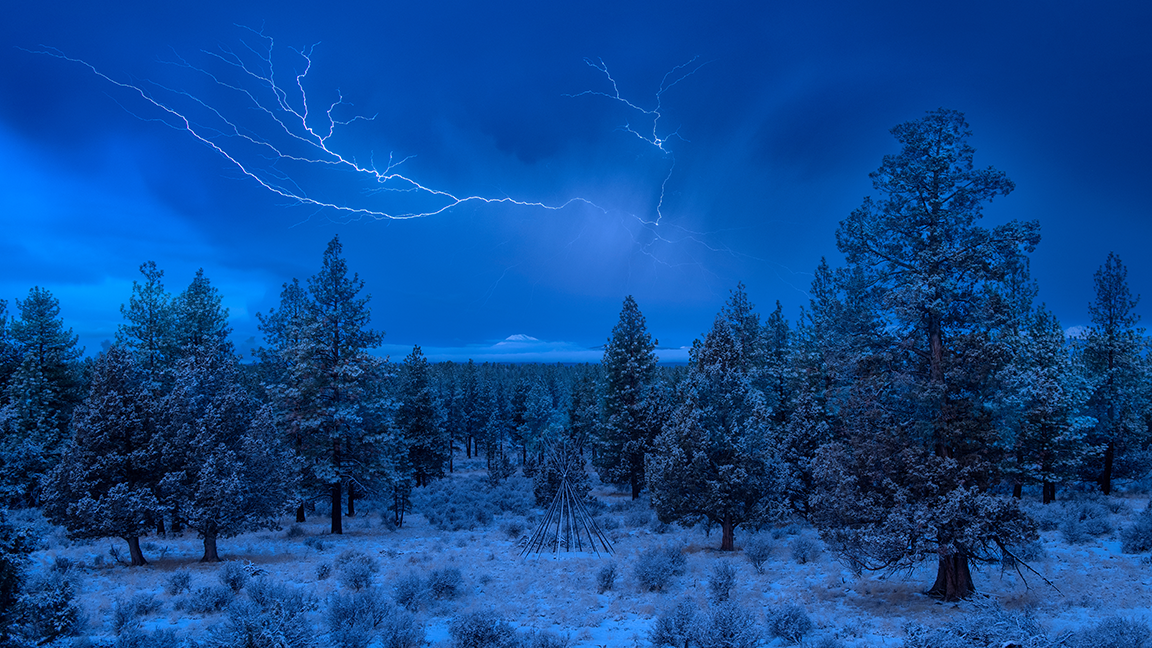 LEARN
Thundersnow: What causes lightning and thunder during a snowstorm?
Most people associate thunder and lightning with thunderstorms, but you shouldn't be surprised if you hear a rumble or two coming from the sky during heavy snowfall.
Posted by Chris Oberholtz Share

FOX Weather Watcher Allen Stalker shared this video of thundersnow as it lights up the sky Tuesday morning in Whitesboro, New York.

FOX Weather Watcher Jennifer Keegin said no one was injured after a tree branch fell into a window in her home in Binghamton, New York, and the power is still out from the snowstorm.

"Tree branches are sagging and some have broken off. Power is out in most of the area and might not be back for a while," he said in a tweet.

Mayor Jared Kraham has declared a state of emergency in the city of Binghamton.

Storm cleanup continues, including downed trees and power lines. Some 9,000 customers are without power, according to NYSEG.

'Ugly day is ahead' for parts of Northeast, NWS says

The photos below look peaceful, but there have been reports coming in overnight of downed trees and power lines.

"And the power outages, suggest an ugly day is ahead for a large swath of our area," the National Weather Service in Binghamton, New York, said in a Facebook post.

As of 7 a.m. EDT, the FAA said departures to La Guardia Airport are delayed on average 109 minutes due to wind. Click here for the latest updates.

Spring on hiatus in Northeast

A strong late-season Nor'easter is bringing significant, heavy snow to portions of the interior Northeast late through Tuesday.

The snow is really coming down in Owego, New York. FOX Weather Watcher @BBMadDog on Twitter posted this video.

6-8 inches of snow reported in Adirondacks

FOX Weather Watcher @ratto_rr on Twitter reports 6-8 inches of snow has fallen in the Adirondacks, as power is out across the region.

100,000-plus without power across upstate New York

More than 100,000 people are without power across upstate New York as a nor'easter brings snow and rain to parts of New York, New England and New Jersey. FOX Weather's Katie Byrne is in Binghamton, New York, with the latest.

Make sure to follow FOX Weather on social media for more videos, photos and coverage of the nor'easter. Don't forget to tag us in your weather photos or use #FOXWeather.

Mounting power outages leave parts of Northeast in the dark

Due to the inclement weather, there is no school for today in the Binghamton City School District. Click here for updates.

Broome County, New York, Executive Jason Garnar said a travel ban is in place in Broome County and all county buildings are closed for the day.

As much as 10 inches of snow falls in Bradford County, Pennsylvania

FOX Weather Watcher Jason Ludwig reports as much as 10 inches of snow has fallen in Bradford County, Pennsylvania