37Posts
Back to Top 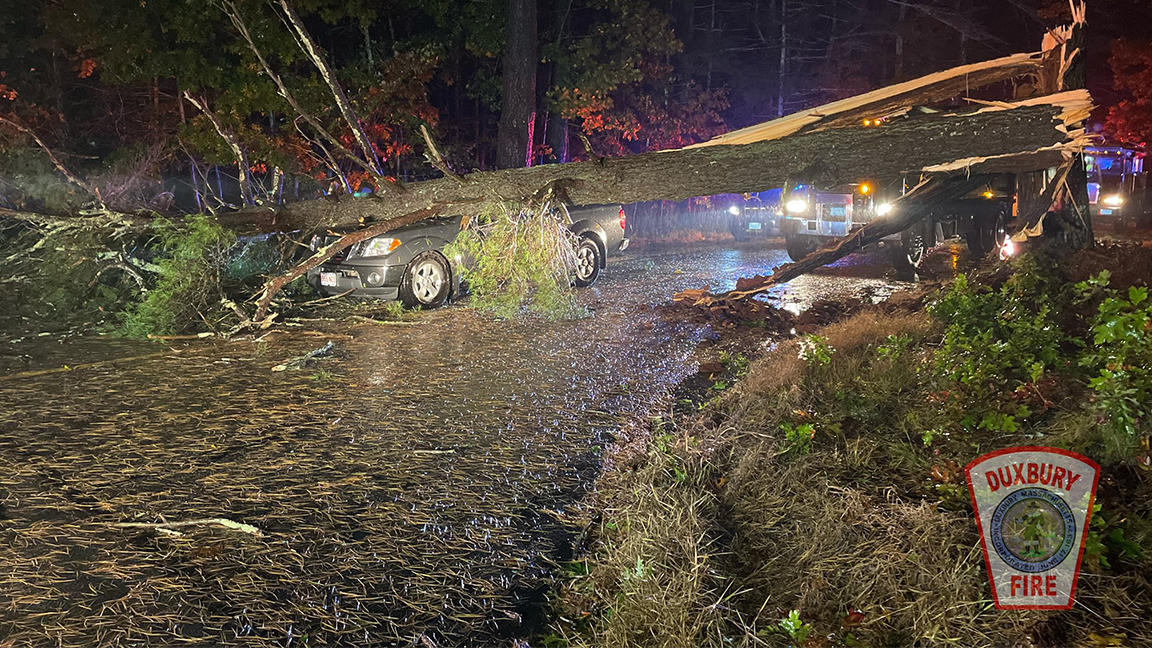 A nor'easter has become a "bomb cyclone" off the New England coast, producing a wind gust to 94 mph in Massachusetts and knocking out power to more than 400,000 in the state.

Road closed in Plymouth, Mass. due to erosion

Route 3A is closed in Plymouth, Massachusetts, due to erosion caused by the nor'easter. Road repairs are needed and utility crews will need to stabilize poles with wires.

Nearly 66 percent of Manchester-by-the-Sea without power

Police in Manchester-by-the-Sea, Massachusetts, said about 66 percent of the town was without power Wednesday.

Crews are out working to clear debris and restore power to those who are affected.

Residents are urged to stay away from any downed power lines.

FOX Weather Multimedia Journalist Katie Byrne reports from Long Island where the National Weather Service has reported gusts of 40 mph during the nor'easter.

Rain totals for the northeast as of Oct. 27.

As the nor'easter pulls out into the Atlantic Ocean, the NWS continues to release rain totals from the powerful storm. Some areas received more than 6 inches of rain.

Several trees were uprooted outside the National Weather Service office in Norton, Massachusetts.

Strong winds brought down trees and power lines across the state during the nor'easter.

Gov. Charlie Baker has met with his administration’s emergency response and public safety officials to discuss the nor’easter’s impact to the state and response efforts.

Nearly 500K power outages have been reported in Massachusetts.

Power outages have continued to climb in Rhode Island because of the nor’easter.

Power outages have continued to climb in Rhode Island because of the nor’easter.

Washington County, which is located in the southern part of the state, is reporting 29K outages.

Nearly a half million people are without power after a nor'easter brought down power lines and trees across the state.

Plymouth County is reporting the most outages with at least 175,000.

Major damage has been reported to the area surrounding Cohasset common.

Historic trees have been brought down by powerful winds.

Rhode Island Gov. Dan McKee is receiving updates from the Emergency Management Agency and National Grid as a nor'easter brings down trees and power lines across the state.

Cohasset police say several boats have been washed ashore because of the nor’easter.

Strong winds have knocked out power to hundreds of thousands of people in Massachusetts alone.

Some Providence schools closed due to power outages

Several schools in Providence are closed Wednesday because of power outages associated with the nor'easter.

A large tree fell across Main Street in Hingham, Massachusetts. A powerful nor'easter knocked out power to hundreds of thousands of people.

Many roads are impassable in Hingham, Massachusetts after a strong nor’easter brought down trees and power lines.

Jeff Lehmann provided this image of a large tree that fell across Main Street.

Trees down in Braintree, Mass.

A tree and wires down came down on Cleveland Avenue in Braintree.

The road is impassable at this time.

Drivers are asked to seek an alternate route.

The national parks in Boston are closed Wednesday because of the powerful nor’easter.

Ocean Water has pushed over Rout e6A between High Street and the Sandwich Line.

Watch: Hundreds of thousands without power in Massachusetts

More than 400,000 customers are without power in Massachusetts after a powerful nor'easter slams the region.

A wind gust of 63.3 mph was reported on Block Island, Rhode Island on Wednesday.

91% of Duxbury, Mass. without power

Tress have been knocked down across Duxbury, Massachusetts.

91 percent of the town is now without power.

First responders are asking everyone to stay off the roads unless it’s absolutely necessary.

Courts closed across Massachusetts due to storm

Courts in several counties in Massachusetts are closed Wednesday because of the powerful nor’easter.

A tree branch fell onto a home and took down power lines in Auburn, Massachusetts.

No injuries or structural damage has been reported.

The MBTA Commuter Rail is reporting major delays as a result of the nor’easter.

A large tree has fallen across power lines in Yarmouth, Massachusetts.

Union Street is closed while crews work to remove the tree.

Stay off the roads as many are blocked with debris.

More than 400K without power in Massachusetts

A powerful nor'easter has knocked out power to more than 400K customers in Massachusetts.

Power outages are continuing to increase as a powerful nor'easter hammers the region with strong winds.

Strong winds have brought down trees across Massachusetts knocking out power to hundreds of thousands of people.

Two major bridges in Rhode Island are closed due to the strong winds.

The Newport and Jamestown bridges will be closed until further notice.

All ferry service to and from Martha's Vineyard and Nantucket has been suspended until further notice.

Passengers are being told to stay home and not head to any ferry terminals.

Nearly all of Stoughton, Mass. is without power

Stoughton police say nearly the entire town is without power because of this powerful nor’easter.

Phone service has been interrupted, but 911 is still operational.

Delays reported on MBTA after trees fall on tracks

There are delays of more than 30 minutes on the MBTA after tress have been brought down across the tracks.

Crews are working to remove trees so normal service can resume.

The National Weather Service in Boston said a wind gust of 94 mph has been reported in Edgartown on Martha’s Vineyard.

That’s the highest gust so far for this nor’easter.

Many roads impassable in Duxbury, Mass.

Fire officials in Duxbury, Mass., say 37 percent of the town is without power, and many roads are impassable because of a powerful nor’easter.

The impacts of a powerful nor’easter has forced officials on Cape Cod to close schools on Wednesday.

Residents are urged to stay off the roads while crews work to restore power.