48-hour rain totals show 9.64" falling in the Santa Cruz Mountains, 3.49 inches in the hills north of San Luis Obispo, and so far just 0.7 inches in Oxnard, CA. A Flash Flood Watch is still in effect for the San Luis Obispo and Santa Barbara County Coast and Coastal Ranges.

'So Far, So Good' on storm watch in Fresno County

Fresno County Sheriff says water is running off the way it's supposed to near Camp Sierra and Big Creek in the burn scar of the Creek Fire.

Kern County, CA is under a tornado warning until 4:45 PDT. The system that soaked Northern California is now dropping quarter-size hail and is responsible for severe thunderstorms and a potential tornado 11 miles west of Wasco moving SE at 25 mph. Kern County is in the Central Valley.

Crews cleared the rockslide from SR 128 and reopened the stretch from the Napa/Solano county line to Markley Cove.

Crews don't have much time to clean up after the weekend storm because FOX Weather forecasts more rain for Seattle tonight through Tuesday.

Rain totals through Monday afternoon for the Bay Area.

The atmospheric river has dumped more than 16 inches of rain in Mount Tamalpais in Marin County, California since Saturday.

Donner Summit along I-80 from California into Nevada remains closed in both directors, according to the California Highway Patrol.

The flash flood warning for the Alisal burn scar area has been allowed to expire.

There is no longer an immediate threat of significant damaging debris flows.

State Route 88 at Carson Spur is closed for avalanche control.

There’s no estimated time as to when the road will reopen. Drivers are asked to seek an alternate route.

Fire crews are working to rescue a person stranded on a ladder above a swollen creek.

The 101 ramp northbound at Carrillo Street is closed.

Sandbags available for residents of Visalia

Sandbags and sand are being offered to residents of Visalia, California.

The Sacramento Fire Department rescued 14 homeless people from flooded areas, and 10 people needed to be rescued from two homes overnight.

All evacuation orders have been lifted in San Mateo County.

Residents are still being advised to use caution when driving as some areas could still be flooded and tress may have fallen across roads.

It’s not just rain people need to be aware of.

A high surf warning is in effect until Tuesday morning.

Anyone visiting the coast is asked to stay back from the ocean.

More than 2 feet of snow falls in Sierra Nevada mountains

Nearly 30 inches of snow fell in a 24-hour period in Donner Pass and Soda Springs.

Not far behind is Sierra Snow Lab with 27 inches of snow and Kirkwood picked up 15 inches.

More than a foot of rain has fallen in some parts of California since Saturday.

Some impressive rain totals are being reported in California.

Highway 50 is closed between Fred’s Place to Meyers because of a late-night rockslide.

Crews are working to clear debris and reopen the road.

Sandbags being handed out in Los Angeles County

Sandbags are being handed out to residents in Los Angeles County because of the flood risk.

The sandbags will be handed out at local fire stations.

A shelter-in-place order was issued for those in the Alisal Fire burn area in Santa Barbara County. Residents are advised to stay inside until further notice, go to the innermost room in their home or get to the highest floor.

FOX Weather Multimedia Journalist filed this report from a very snowy Lake Tahoe, saying more than a foot of snow has fallen and the flakes are still flying.

FOX Weather's Will Nunley has been on the north side of Lake Tahoe, California where the snow began falling Sunday night.

Tahoe City estimates about 20 inches of snow as of 11 a.m. EDT, according to NOAA.

Marin County fire agencies responded to more than 650 calls, including 20 crashes and 185 flooding reports in the past 24 hours as of Monday morning.

Reminder: If you can't see the road don't try and drive through flooded areas.

Restricted travel on I-80 in Utah

A semi-truck blew over at mile marker 78 on I-80 in Utah, according to the Utah Department of Transportation.

UDOT is placing restrictions on high profile vehicles on western portions of I-80 until the winds die down.

Strong Winds will continue through 6 pm. and beginning at 8 p.m. through midnight snow is expected to impact the corridors through the mountain regions, according to the NWS.t

East of San Francisco, the Alameda Police Department reports traffic is closed on Harbor Bay Parkway due to flooding. Drivers are asked not to attempt to drive through the water.

Alameda received 5.45 inches of rain in the last 48 hours, according to the NWS.

Flooding was reported across the city of Santa Rosa, California, as a powerful storm moved into the area Sunday.

The western storm bringing gusts over 50 mph and knocking out power to thousands claimed two lives Sunday after winds knocked a tree onto their car in Preston, Washington, according to the King County Sheriff's Office.

Read the full story below. 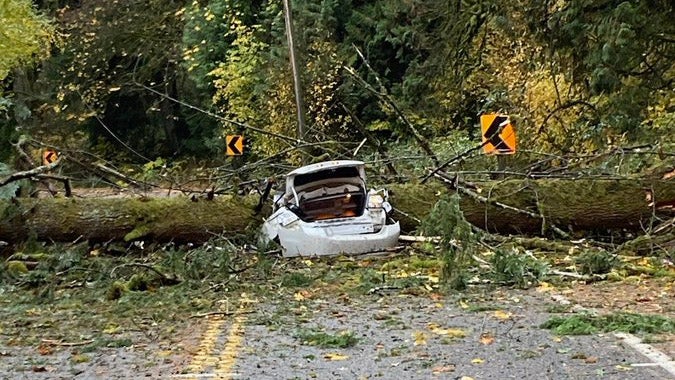 WEATHER NEWS
Northwest windstorm claims 2 lives near Seattle as strong gusts topple trees
Two people were killed near Seattle Sunday when a tree fell on top of their car during a wind storm that brought gusts over 50 mph and knocked out power to thousands.
Posted by Emilee Speck Share

The NWS office in Seattle/Tacoma is reporting some areas saw wind speeds above 60 mph, including Paine Field Everett Airport, in the last 24 hours. Seattle reported a 54 mph wind gust around 2 a.m. Monday.

A wind advisory for San Luis Obispo County, California remains in effect until noon PDT Monday. Gusts up to 50 mph are possible with isolated gusts up to 60 mph in the mountains, according to the NWS Los Angeles office.

It could take days to clean up debris from flooding and excessive rainfall in some areas across California.

Here's the latest on road closures and damage reports. 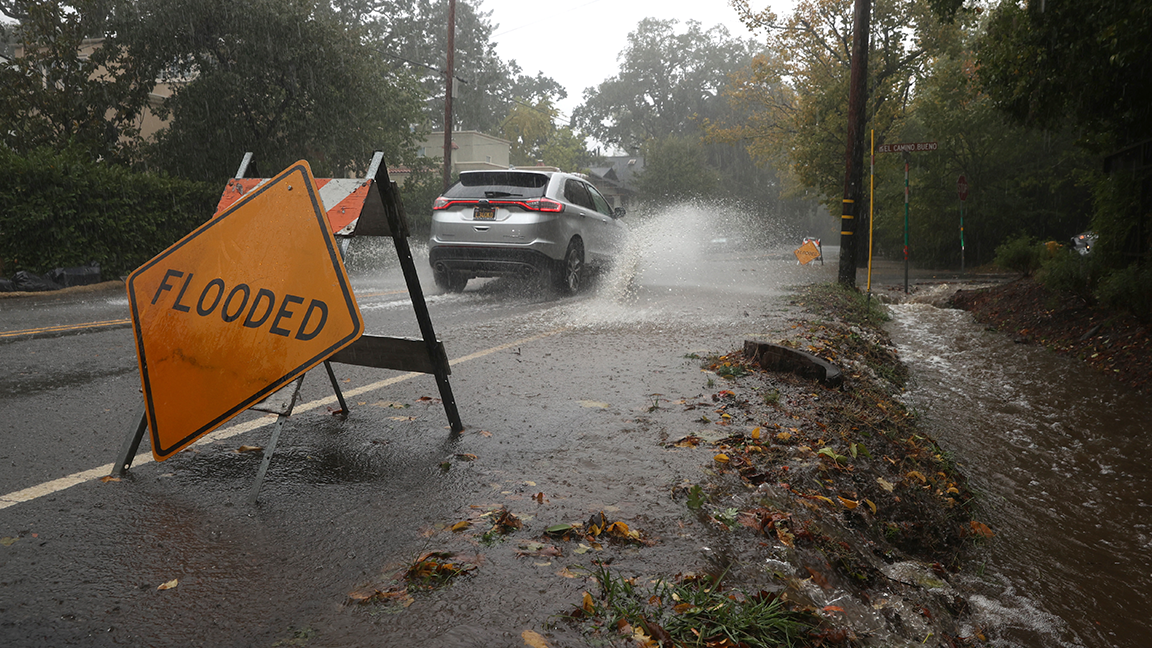 I-80 closed at state line

Interstate 80 at the California-Nevada state line is closed as winter weather has made driving conditions unsafe. Drivers should find an alternative route.

Fire rescue and local officials are warning morning commuters of possible dangers on the road. Standing water and mud slides have closed some highways.

The National Weather Service has issued a high surf advisory through 11 a.m. Tuesday for most of the West Coast with possible wave heights up to 30 feet.

More than 100,000 are without power Monday morning across California as heavy rain and wind continues.