13Posts
Back to Top

Dragon Endeavour is lifted onto the recovery boat.

Two fast boats quickly arrived at the spacecraft in the water. Next, the Dragon Endeavour will be secured and brought on board the SpaceX recovery vessel, Go Searcher.

Four astronauts are now safely back on Earth after splashing down at 10:33 p.m. ET off the coast of Florida.

"Endeavour, on behalf of SpaceX, welcome back to planet Earth," SpaceX mission control told the crew.

Recovery crews were en route on fast boats to secure the spacecraft.

The main parachutes are out, slowing Dragon down to about 15 mph for splashdown.

After an expected communication blackout. Mission control has once again acquired the spacecraft's signal.

Barreling through Earth’s atmosphere the first set of parachutes called Drogue chutes have deployed on time. This will slow the spacecraft to about 120 mph.

NASA astronaut Shane Kimbrough (front) in the Dragon Endeavour spacecraft ahead of splashdown.

For about 7 minutes, mission control will be unable to communicate with the astronauts in Crew Dragon. This black out is expected. On the other side of the black out, the parachutes will be deployed and landing comes minutes later.

A series of landing events unfold in quick succession. Here's what happens in the last 30 minutes to landing.

"We are in the home stretch."

Dragon is currently completing a deorbit burn from 9:39 to about 9:55 p.m. ET. This kicks off a series of events for landing and is a critical part of today's splashdown.

Coming up: Dragon positions itself for landing

Dragon will perform a ~40 second phasing burn that lines the spacecraft up with the landing location in the Gulf of Mexico. Everything is still "go" for landing.

Spacesuits are on; weather is go for landing

The crew have put on their spacesuits for the de-orbit burn. Mission control just briefed the astronauts and said weather at the landing site in the Gulf of Mexico is very good.

"It's basically a lake out there," SpaceX mission control told the crew.

How does Crew Dragon slow down for landing?

The SpaceX Crew Dragon Endeavour spacecraft is seen as it lands with NASA astronauts Robert Behnken and Douglas Hurley onboard in the Gulf of Mexico off the coast of Pensacola, Florida, on Aug. 2, 2020. (Image: NASA)

NASA has specific criteria for a successful spacecraft recovery, including wind speed no greater than 15 feet per second and wave height no greater than a 7 degree wave slope.

The weather around the landing site is essential for the astronauts' safety and the recovery teams waiting to pick up the spacecraft in the water.

About two hours before landing conditions off the coast of Pensacola are looking good for landing. 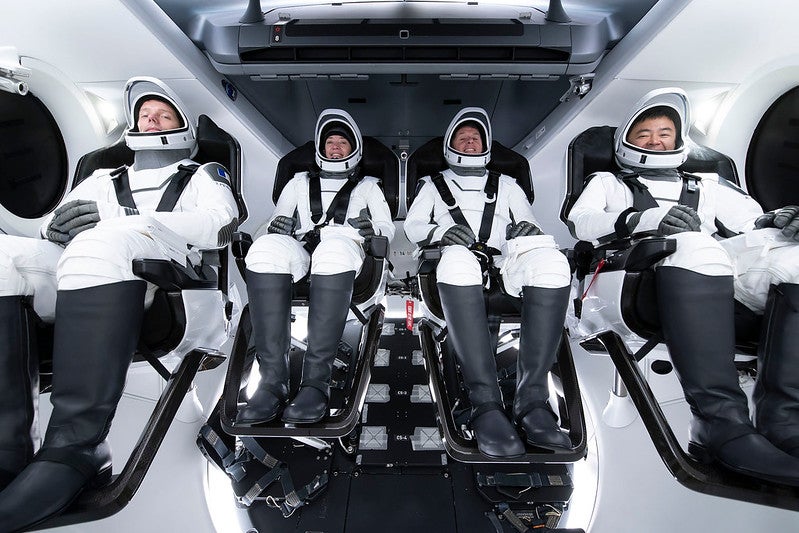 EARTH & SPACE
Crew-2 astronauts ready to return to Earth with splashdown off Florida coast
After six months away from their families and gravity, SpaceX will bring a team of international astronauts home Monday in the Crew Dragon spacecraft, splashing down off Florida's Gulf Coast.

The astronauts who make up the Crew-2 mission are just two hours away from splashing down in the Dragon Endeavour spacecraft off the coast of Pensacola, Florida.