50Posts
Back to Top

Up to three additional inches of snow could fall across Oswego, Watertown, Buffalo and Erie County, New York. Winds gusting up to 35 mph would reduce visibility to a quarter-mile or less according to the National Weather Service.

Up to another inch of snow could fall from Somerset, Pennsylvania though to Beckley, West Virginia. The National Weather Service warns of low visibility and wind chills as low as 5 below with winds gusting to 30 mph.

As temperatures remain below freezing through Tuesday morning any melting snow and slush will refreeze making for a slick morning commute.

New York's LaGuardia Airport is reporting major delays, up to 55 minutes. Winds are gusting to 26 mph. Airlines canceled 123 flights and 310 flights were delayed today according to FlightAware.com.

Washington, D.C.'s Reagan National Airport is experiencing 30 minute delays according to FlightAware.com. The wind is gusting to 33 mph.

Record snow has been recorded in Buffalo, NY.

Video: Rescues due to coastal flooding in Niantic, Connecticut

Highest snow totals by state as of 3 p.m. on Monday

The National Weather Service also posted these totals along with the ones in the tweet:

Highest snowfall totals by state as of 3 pm Monday:

A Gail Warning is in effect until 10 p.m. Monday.

Over 1,700 flight have been delayed and nearly 1,600 flights have been canceled so far in the U.S. Monday.

28 inches of snow along Lake Erie in Ohio

The town of Ashtabula, Ohio, along Lake Erie has picked up 28 inches of snow since Friday.

The water measured 2 feet deep in some locations.

View from above: Winter storm from space

The powerful winter storm barreling over the Northeast could be observed by NOAA satellites.

Wind gust reports in the Northeast

Several locations in the Northeast and New England have reported wind gusts over 65 mph.

Power outages down to just over 205K

The number of power outages associated with a powerful winter storm have dropped slightly to just over 205,000.

Most of the outages have been reported in North Carolina and South Carolina with about 28,000.

West Virginia has reported around 24,500.

Video shows waves crashing over a seawall in Madison, Connecticut, after a powerful winter storm moved through the area on Monday.

A video posted to Twitter shows waves crashing on shore in Ogunquit, Maine on Monday morning.

Portions of Mosholu Parkway in NYC closed due to flooding

Top snow reports for the winter storm since Friday.

Harpersfield and Madison, Ohio and Banner Elk, North Carolina have received more than 20 inches of snow since Friday.

Gusts up to 60 mph along Blue Ridge Parkway

A high wind warning remains for the Blue Ridge Parkway from Roanoke, Virginia to Boone, North Carolina where gusts up to 60 mph are expected.

The 41-year-old driver and his 41-year-old female passenger were killed. The victims were both from Myrtle Beach, South Carolina.

An 82 mph gust was reported at the summit on Monday morning.

FOX Weather multimedia journalist Robert Ray is in Asheville, North Carolina, where more than 10 inches of snow fell during the major winter storm.

After closing for the storm Sunday, Gettysburg National Military Park in Pennsylvania is back open Monday. All National Parks entrance fees are waived to celebrate the birthday of Martin Luther King Jr.

Police are asking people to stay off the roads to allow crews to remove snow from city roads.

Empty, tandem tractor-trailers banned on I-81 in New York

The ban is in effect in both directions south of the New York and Pennsylvania line.

12-18 inches of snow expected in the Rochester, NY area

FOX Weather Correspondent Max Gorden is in Rochester where crews have been busy trying to clear snow from city roads.

The area could see 12-18 inches of snow by the time the storm moves out of the region.

For more information on the winter storm, click here.

The Niagara County Sheriff’s Office says residents are encouraged to restrict non-essential travel for the duration of the winter storm.

Areas along the coast in New England have reported wind gusts higher than 60 mph on Monday morning.

Hundreds of thousands of power outages have been reported up and down the East Coast as a powerful storm system brought severe weather, heavy snow, ice and strong winds to the region.

To read more about the winter storm, click here.

Lake-effect snow will follow winter storm in the Great Lakes

On the heels of a winter storm, a fast-moving system, known as an Alberta Clipper, could bring widespread lake-effect snow to northern Minnesota Tuesday morning before moving into the Great Lakes region later in the afternoon.

More than a foot of snow possible in Rochester, NY

More than a foot of snow is possible in Rochester, New York as the major winter storm dumps heavy and blowing snow. Lake-effect snow beginning Monday night into Tuesday will continue to drive up those snow totals, mainly east of Rochester, according to the NWS in Buffalo.

More than 60,000 in South and North Carolina without power

The winter storm has knocked out power for more than 60,000 customers between South and North Carolina.

Crews have been busy trying to clear snow from the Frederick Douglass Greater Rochester International Airport on Monday morning.

The Department of Transportation in Rochester, New York shared video of a plow clearing heavy snow from roads.

The powerful winter storm affecting the Northeast and New England is expected to move into Canada on Monday afternoon and evening.

Up to 2 feet of snow is possible in some locations.

Concerns for coastal flooding are growing as a powerful winter storm moves through the Northeast on Monday.

Delays have been reported northbound at West 190th street in Manhattan.

The New York Department of Transportation is asking people to avoid any unnecessary travel while crews work to clear snow and ice from roads.

Speed restrictions are in place on several roads and highways in New Hampshire.

The restrictions are due to poor visibility and snowy conditions.

The airport is asking passengers to check with airlines directly for cancelations and delays.

A powerful winter storm is continuing to batter the Northeast with heavy snow, rain and strong winds.

You can track the storm using the FOX Weather 3D Radar.

Strong wind gusts have been reported along the East Coast.

Power outages are likely in the region because of the winter storm.

Read more about the winter storm by clicking here.

Speed restrictions in place on I-90 in Massachusetts

A 40 mph speed restriction has been put into place on the Massachusetts Turnpike from the New York border to Wilbraham.

Due to the winter storm, new restrictions have been added to the Pennsylvania Turnpike.

Read more about the winter storm by clicking here.

More than 218,000 power outages have been reported so far, and that number is expected to climb at the major winter storm continues to move through the Northeast.

Read more about the storm by clicking here.

4 tornadoes confirmed in Florida on Sunday

Four tornadoes were confirmed in Florida on Sunday

Four tornadoes were confirmed in Florida on Sunday.

This was part of the powerful winter system that brought severe weather, heavy snow, ice and rain to the eastern United States.

Read more about the tornadoes by clicking here. 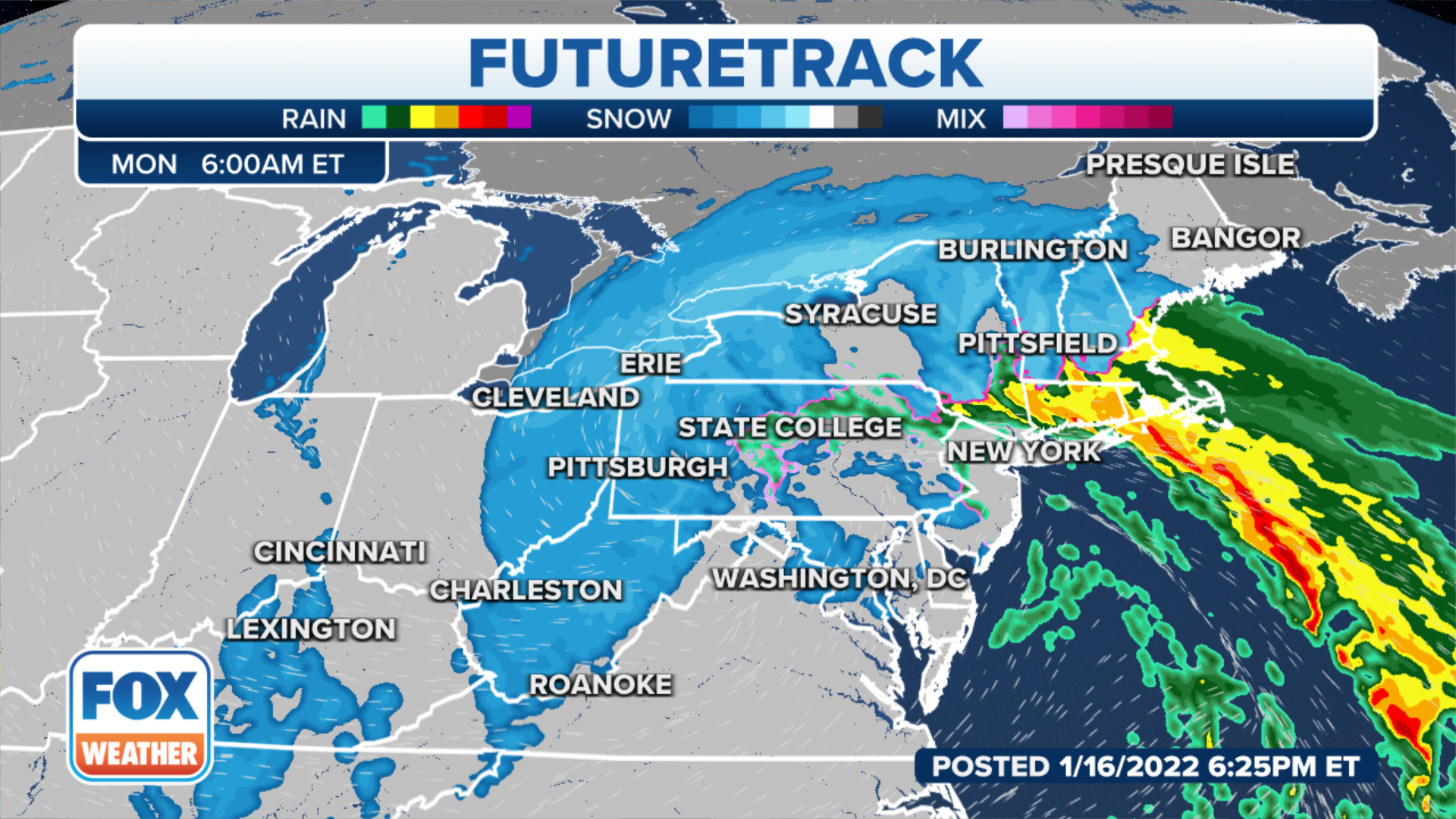 WEATHER NEWS
Winter storm blanketed South in snow, rain for coastal Northeast
The weekend's winter storm that dropped over a foot of snow across the South and Mid-Atlantic states is charging north up the eastern seaboard. Areas near the coast are seeing all rain while snow continues to pile up across the interior.

Areas near the coast are seeing all rain while snow continues to pile up across the interior.