31Posts
Back to Top

Severe weather is active in the Midwest and Plains Thursday bringing the threat of hail, strong winds and tornadoes. Follow active weather alerts.

Emergency management in Kandiyohi County, MN reports one person was killed after a grain bin fell on a car Thursday evening near the rural town of Blomkest. Severe thunderstorms were around at the time of the incident.

See the sights of a haboob move across the Plains 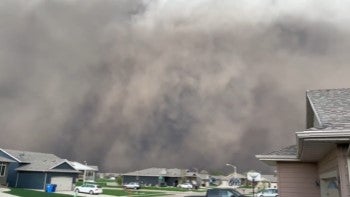 EXTREME WEATHER
Sun shrouded by haboob across the Plains
An immense wall of dust known as haboob swallowed neighborhoods across South Dakota and Nebraska on Thursday making the sky look it was the middle of the night.
Posted by Andrew Wulfeck Share

A tornado-warned storm is moving towards northern Minnesota. The National Weather Service has issued a Tornado Warning for several counties as the storm moves northward.

More than 70K outages have been reported from the Plains into the Upper Midwest because of damaging winds.

Tornado-warned moving through I-94 corridor

A storm continues to produce Tornado Warnings on its trek through through Minnesota.

Several Tornado Warnings have been issued in Minnesota which now include areas around Renville, Prinsburg and Blomkest.

Severe storms have now moved into southern Minnesota and have forced meteorologists to issue Tornado Warnings for several counties.

Winds around Tripp, SD were reported to be over 100 mph as the severe storms rolled in. More than 25,000 power outages were reported in the state.

In addition to the severe weather, damaging winds are picking up dirt and dust and reducing visibilities for areas around the South Dakota-Nebraska line.

The FOX Weather 3D Radar is tracking several tornado-warned storms through the state of South Dakota. The latest Tornado Warning was issued for areas around Watertown SD and I-29.

The strong winds associated with the storm system moving through the Plains has formed a haboob.

The NWS has issued a Tornado Warning for areas around Columbus, Nebraska because of a supercell moving through the eastern part of the state.

A massive wall of dust is impacting visibilities around Sioux Falls, SD.

A storm moving through South Dakota continues to show signs of rotation and the NWS has issued a Tornado Warning for areas in northern SD.

Wind gusts of more than 60 mph in South Dakota have already knocked out power to more than 7,000 customers.

A Tornado Warning has been for areas around Hitchcock, SD because of a storm with radar indicated rotation.

The National Weather Service Office in Hastings, NE says they spotted hail the size of half dollars falling outside their building.

Video shows lightning flashing across the sky in Alpena, South Dakota. The area is under a Severe Thunderstorm Warning until 5:30 p.m.

A Tornado Warning has been issued for Clay Center, Glenvil and Inland, Nebraska until 5 p.m. CDT.

Severe thunderstorms near Ayr capable of producing a tornado are moving northeast at 60 mph.

Destructive wind gusts up to 80 mph likely near Sioux Falls

The NWS Office in Sioux Falls is warning of potential wind gusts between 80 and 100 mph from 5 to 6 p.m.

Part of South Dakota under Tornado Watch until 10 p.m.

The SPC has issued a Tornado Watch until 10 p.m. CDT for Central and Northeast South Dakota.

According to the SPC, the tornado potential will be maximized near the area of Pierre/Chamberlain to Aberdeen and Huron.

The tornado threat for Thursday night.

The Storm Prediction Center has highlighted a "hatched area" in Central and Northeast South Dakota where there is a significant threat of tornadoes.

Find out what a "hatched" area means here.

A Severe Thunderstorm Watch is underway for Central and eastern Minnesota and northwest Wisconsin until 5 p.m.

Severe Thunderstorm Watches were also issued for the rest of northern Wisconsin, the Upper Peninsula of Michigan, eastern Nebraska and northern Kansas until 9 p.m. Central.